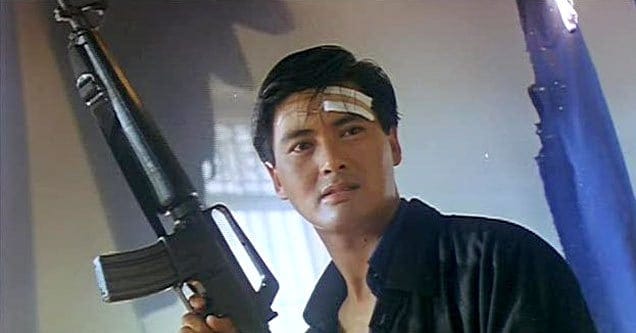 When i go into a Chow Yun Fat movie, the first thing i think is “How many people will he kill in this movie”, the guy is just the greatest when it comes to Gun play movies.

Chow Yun Fat was born May 18, 1955. He is best known in Asia for his collaboration with filmmaker John Woo in heroic bloodshed genre films A Better Tomorrow, The Killer, and Hard Boiled.
Chow was born in Hong Kong, to a mother who was a cleaning lady and vegetable farmer, and a father who worked on a Shell Oil Company tanker. Of Hakka origins, he grew up in a farming community on Lamma Island in a house with no electricity.
He woke up at dawn each morning to help his mother sell herbal jelly and Hakka tea-pudding on the streets and in the afternoons he went to work in the fields.

His family moved to Kowloon when he was ten. At seventeen, he quit school to help support the family by doing odd jobs including bellboy, postman, camera salesman, and taxi driver. His life started to change when he responded to a newspaper advertisement and his actor-trainee application was accepted by TVB, the local television station. He signed a three-year contract with the studio and made his acting debut. With his striking good looks and easy-going style, Chow became a heartthrob and a familiar face in soap operas that were exported internationally.

Chow has been married twice; first in 1983, to Candice Yu an actress from Asia Television Limited; the marriage lasted nine months. In 1986, Chow married Singaporean Jasmine Tan. Currently, the couple have no children, although Chow has a goddaughter, Celine Ng, a former child model for Chickeeduck and other companies.

On June 26, 2008, Chow released his first photo collection in Hong Kong, which includes pictures taken on the sets of his films.
Proceeds from sales of the book were donated to Sichuan earthquake victims. Published by Louis Vuitton, the books were sold in Vuitton’s Hong Kong and Paris stores. Movie Business
It did not take long for Chow to become a household name in Hong Kong following his role in the hit series The Bund in TVB in 1980. The Bund, about the rise and fall of a gangster in 1930s Shanghai, made him a star. It was one of the most popular TV series ever made in Hong Kong and was a hit throughout Asia.

Although Chow continued his TV success, his goal was to become a big screen actor. His occasional ventures onto the big screens with low-budget films, however, were disastrous. Success finally came when he teamed up with director John Woo in the 1986 gangster action-melodrama A Better Tomorrow, which swept the box offices in Asia and established Chow and Woo as megastars. A Better Tomorrow won him his first Best Actor award at the Hong Kong Film Awards. It was the highest grossing film in Hong Kong history at the time, and it set the standard for Hong Kong gangster films to come. Taking the opportunity, Chow quit TV entirely. With his new image from A Better Tomorrow, he made many more ‘gun fu’ or ‘heroic bloodshed’ films, such as A Better Tomorrow 2 (1987), Prison on Fire, Prison on Fire II, The Killer (1989) and City on Fire an inspiration for Quentin Tarantino’s Reservoir Dogs. The 90’s was huge for Chow, with movies like Once a Thief, Hard Boiled, Full Contact and The Replacement Killers made him more well known to the international market. But in 2000, Chow starred in a different kind of role playing “Li Mu Bai” in the huge worldwide hit movie “Crouching Tiger, Hidden Dragon”. The movie also starred Michelle Yeoh and Zhang ZiYi and although Chow is not a fighter, he certainly looked in great form in this movie.

Throughout the 2000’s till today, Chow starred in some good movies, which include, Curse of the Golden Flower, Confucius, Shanghai, Let the Bullets Fly and three movies ready to be released in the near future, The Monkey King, The Assassins and The Last Tycoon. It seems no matter the style of movie, weather it is guns, martial arts or just plain drama, Chow can do them all. He really is a fantastic actor and action star and i really hope very soon him and John Woo team up for a three movie deal and bring back the classic Gun fire movies. Enjoy this tribute video i made of the legend, thanks.