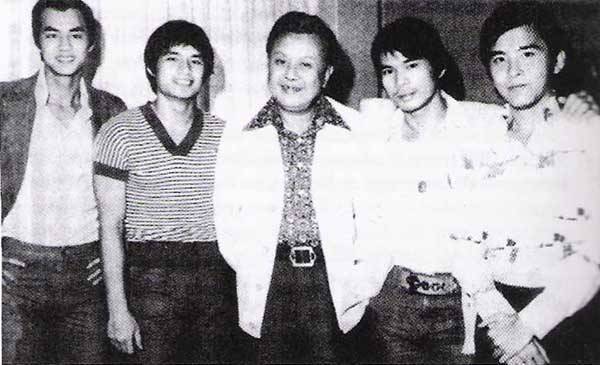 Chang Chen is one of the best directors in Kung Fu cinema, known as the main man behind many Shaw Brothers classics, Chang Chen always brings blood and guts as well as having a great story line and great characters in his movies.

Some of my favorite movies of he’s are, Vengeance, Boxer From Shantung, Five Venom’s, Shaolin Martial Arts plus many more. He always brought great depth within most of his characters unless he just went all out and wanted a very bloody movie filled with fights. John Woo was also a big fan of Chang’s and also learnt a lot from him working on certain movies. He gave us raw power in terms of the leading males in his movies and with Lau Kar Leung choreographing many of the fight scenes, you know your in for a real treat. After graduating from National Central University (later renamed Nanjing University in Nanjing and reinstated in Taiwan) in Chongqing (Chungking), where he studied politics, Chang moved to Hong Kong, where he became a film critic. Chang got his start in the film industry as a screenwriter; his first script was The False Faced Woman, a movie from Shanghai which was released in 1947. He wrote several more scripts before making his directorial debut in 1949 with Mount Turbulence. His first big hit came with 1967’s One-Armed Swordsman, the first film in Hong Kong history to gross HK$1 million. The film catapulted actor Jimmy Wang Yu to stardom and cemented Chang’s status as one of Hong Kong’s top directors. In the same year, he released The Assassin, another early Chang classic, and in 1968 he followed up with Golden Swallow, a sequel to King Hu’s classic wuxia picture Come Drink With Me. He often co-wrote scripts with fellow screenwriter Ni Kuang, and occasionally co-directed films with directors such as Baau Hok-li, Wu Ma and Gwai Chi-hung. He even occasionally wrote and co-wrote music for his films. In addition to his film related work, he also wrote novels, poetry and non-film related articles under numerous pseudonyms.

Heavily influenced by Sergio Leone’s spaghetti westerns and Japanese samurai films, Cheh brought elements from these movies into his own work, revolutionizing Hong Kong filmmaking. His swordplay films of the 1960s (including One Armed Swordsman), filled with bloody scenes of the hero cutting his way through a roomful of opponents, were considered at the time by Westerners to be violent trash but are now looked back on as masterpieces of the genre.

In the early 1970s Cheh began making kung fu films (including Five Shaolin Masters and Five Venoms) sometimes filming four or five movies in a single year. His earlier kung fu movies were often done in collaboration with choreographer (and future director) Lau Kar Leung, who Chang had worked with, along with choreographer Tong Gaai, on earlier films. After falling out with Lau on the set of Disciples of Shaolin, Chang started featuring a troupe of actors made up of Sun Chien, Chiang Sheng, Philip Kwok, Lo Meng, Lu Feng, Wei Pai (and Yu Tai Ping), who would come to be known as “The Venoms”, as actors and choreographers in his films. His films from this period, including Five Deadly Venoms, Kid with the Golden Arm, and Crippled Avengers, feature a heavy influence from the wuxia movie genre, and are considered his most popular films in the west – not counting 1982’s Five Element Ninjas, aka Chinese Superninjas.

Chang was a pioneer of what is known by some as “heroic bloodshed”; films that emphasize brotherhood, loyalty and honor, and several of his films, including Vengeance, Boxer From Shantung and Chinatown Kid, can be seen as clear influences on the later work of directors such as John Woo and Ringo Lam. His influence on future filmmakers such as Quentin Tarantino (who listed Chang as a dedicate in the end credits of Kill Bill Volume 2), Robert Rodriguez and Zhang Yimou is unquestionable. John Woo, who lists Cheh as his chief film making inspiration, worked as assistant director on many of the master’s films, including Boxer From Shantung, The Water Margin and The Blood Brothers.

Not long before Chang passed away, he received a life time achievement award for all the excellent he did for Hong Kong cinema over the years. Some people call him the God-Father of Hong Kong cinema and maybe he is, so go grab his movies from the shelf and re-watch some of his classics.