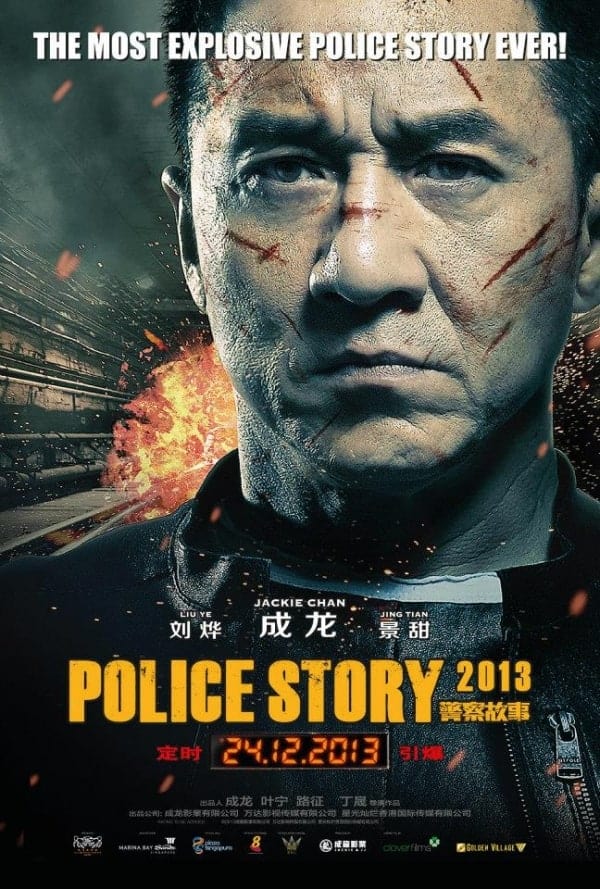 ‘Police Story 2013’, one of the most beloved Jackie’s franchises, hits the reset button. Let me explain: this brand new installment is in fact, literally, brand new; new characters, new tone… This film has little to do with the Jackie Chan Standard we’ve all come to love. Maybe age is a little more than just a number and we must wave off the crazed, life endangering stunts era. Mourn as you need to, but don’t despair, as Jackie, at least, is classy enough not to pull any “Norris” (FYI: using a stunt double with a low-pulled, broad-brimmed hat to do your spinning back-kicks). None that I could catch, anyway.

In ‘Police Story 2013’ Jackie plays Zhong Wen, a veteran and uncompromising mainland cop with the weight of the world on his shoulders. Doing the right thing often puts you in the wrong place, but even with everything else falling apart around him, Wen carries on guided by an unwavering morality and sense of duty. In this sense, he is a classic hero; like Superman or 007, Wen barely evolves or changes in any way, and ends the story as rightfully stubborn as he begins. It’s not that the character is single-stroked, but neither a stroke is erased nor is it added by any event. All conflict is forced from the outside, a straight-forward “man vs. fate” tale that could pass for an 80’s movie.

And not only so in the writing department, but almost in every other aspect of the film: cold neon light, a bigger-than-life villain’s bunker-like lair, a even-bigger-than-fiction villain himself (played by Ye Liu)… I mean, the bad guy even has his own branded objects, just like James Bond’s villains of yore (the logo: a spider, no less). I can’t say if it’s deliberated, but almost every frame of ‘Police Story 2013′ brought me a sense of nostalgia of simpler times in action cinema, where heroes’ flaws could be found in their abilities, but not in their character.

The story of ‘Police Story 2013’ revolves around a hostage situation with regular flashbacks that allow for outdoor action scenes to be shown and, less importantly, the reconstruction of the bad guy’s motivation. The first part could be summed up as a ‘Die Hard’ scenario, with a sort of ‘Jackie McClane’ creeping between pipes and beams and informing the police force outside, but then the story jumps over several filmic references that I won’t spoil for you (well… just one: there’s even a ‘Rashomon‘!). All of this running parallel to a personal story-line of redemption and reunion, of course, in this case facilitated by Miao, Wen’s estranged daughter (played by Tian Jing). Sometimes, it takes a kidnapping for a police officer’s family member to realize that their father/husband/whatever is not a bad lad, after all. Ask Holly Gennaro.

All in all, even with its “homage” overcrowding, ‘Police Story 2013’ is a fairly interesting movie, with an earnest Jackie Chan willing and able to uphold a thriller almost on his own, filling every shot with a veteran’s confidence even so far away from his comfort zone (in principle), as there’s not a lot of fighting, and no comedy at all. He doesn’t go out of his way with crowd-pleasing gimmicks, the tone of the film stays on route every second, and the movie end up claiming a space of its own successfully. And that’s more than you can (or should) expect of any movie. Also… nostalgia gets me, even if it’s involuntary.