What is it about?

An ex-special agent Tae-sik Cha’s only connection to the rest of the world is a little girl, So-mi, who lives nearby. Her mother, Hyo-jeong smuggles drugs from a drug trafficking organization and entrusts Tae-sik with the product, without letting him know. The traffickers find out about her smuggling and kidnap both Hyo-jeong and So-mi.

The gang promises to release them if Tae-sik makes a delivery for them, however it is actually a larger plot to eliminate a rival drug ring leader. When Hyo-jeong’s disemboweled body is discovered, Tae-sik realizes that So-mi’s life may also be in danger.

Tae-sik becomes enraged at the prospect that So-mi may already be dead and prepares for a battle, putting his own life at risk.

Is it any good?

So in truth there really is nothing truly unique or original about the plot but given how difficult it seems these days for film makers to really break from the mould its not at all surprising.

What we have here is essentially a Korean version of The Denzel Washington Film ‘Man on Fire’ … but better!

Yeah that’s right – in my opinion ‘Man From Nowhere’ is better than the already excellent ‘Man on Fire’.

‘Man From Nowhere’ stands out for various reasons but none more prominent than the ‘new’ Won Bin!

Previously known for playing very soft and fragile characters (Mother, Brotherhood), Won really does shine in this new harder role, a role which would usually belong in the domain of Korean megastar Lee Byung-hun (‘Bittersweet life’, ‘Iris’, ‘I Saw the Devil‘) .

Won brings incredible believability to the film, at times saying very little, yet able to convey emotion with just a look, Won rightly deserved the best actor awards at the recent Grand Bell and Korean Film Award events earlier in 2010.

Similarly Kim Sae-Ron (Somi) is excellent in her role (in what I believe is her first feature length picture). Whilst she, in comparison as very little screen time she’s very much a joy to watch and even provides some of the films few humorous moments.

Another element of Kim’s acting which really impressed me turned out to be the highly emotional scenes. At times in films the whole emotion of a scene can be completely destroyed when usually the younger actors overplay the emotion and force it onto the screen.

With Kim its all very subtle and believable and as with Won there are times when she says very little yet the full extent of her emotion is fully understood.

Of yes!! Did I mention this was a action movie! Think ‘Bourne Identity’ and you’ve pretty much summed up the type of hand to hand action to expect from this movie. You can even be forgiven for thinking that some fight scenes were copied straight from a multitude of fight scenes in the ‘Bourne trilogy’.

With Man from Nowhere the fight scenes just feel some much better , huge credit goes to the camera crew for this one as they are on point at every possible moment during the fight scenes so you don’t miss a thing (unlike the ‘shaky’ cam method of Bourne).

In particular a huge round of applause for the final fight sequence, very reminiscent of the final scenes in ‘Bittersweet Life’, I had to watch the scene more than once to truly appreciate the work that went into it. Bravo!

Kim He-won who plays the main gangster boss ‘Man-Seok’ is also great. I Really wish he had the opportunity to shine more in the films have seen him in. There is a lot of unlocked talent there waiting for be unleashed!

But alas its not all great with ‘Man from Nowhere’, there is a flip side to everything I’m afraid and whilst there are only a few negatives to take away from ‘Man from nowhere’ its still very much a blotch which stops this film from turning from great to a True Korean Classic.

I have nothing against Thanayong at all, but in particular I do have something against foreign language films which for some reason or another find the need to throw in English dialogue.

It just never works and for me completely ruins any scene in which this happens. Sadly where this does occur is a very important scene in the movie. RUINED! 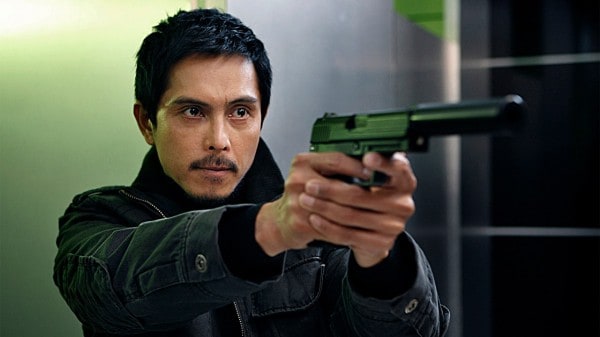 But in saying that,Thanayong is a key character in the film and the face off with Tae in the night club… Brilliant!
(I loved the final stare off… and so will you !)

Tae’s background story.
I will not go much into this as I do not really want to spoil the movie. But honestly … it just does not work for me, there just is no connect whatsoever between what happened in the past to the reason why he runs a pawn shop alone .

Tae is a strong enough actor to bring enough emotion to a film without the need for the flashback. Whilst in some ways its needed to fully round off some elements of the story, I just felt as though it was being pushed down my throat. The movie is called ‘The Man from Nowhere’… so why tell us anything about his past.

Leave it up to the audience to piece it together. I really believe that if the audience were allowed to work out who Tae really was throughout the movie we would have been treated to a stronger overall film.

Director Lee Jeong-beom as done a great job here. Using ideas from previously successful movies and fusing them together can be a difficult job , but he’s really pulled it off. The sum of all parts is greater than their originals.

Fans of any of the aforementioned movies will really enjoy ‘The Man from Nowhere’, Won Bin fans will be shocked (in a good way) at his ability to take on a more hardcore role. And movie fans in general will come away from this film thoroughly enjoyed!

Despite the tough competition, ‘The Man from Nowhere’ just comes out on top to be our pick for the best Korean film of 2010.

P.S I really do hope that this is not the last time we see Won Bin in this type of role!

Man From Nowhere is now available to stream via NetFlix

Trailer for Upcoming Korean Film “The Villagers” by Lim Jin-soon

‘The Handmaiden’ nominated for best non-English movie award at BAFTA

‘The Fortress’ is Best Film at Korean Critics Choice Awards 2017

8 New Korean Films That You Should Watch This Spring