In the January 2016 Box Office Report  we talked about the lack of block buster movies during January and how this affected Korean Film Admissions. But things have changed with the release of “A Violent Prosecutor” the debut film from Lee Il-Hyeong. This crime-comedy features Hwang Jung-min, Gang Dong-won, Lee Sung-min, Park Sung-woong, along with other great actors.

The film was released on Wednesday February 3rd. On it’s debut night it managed to attract 526,000 spectators and later during the Chinese New Year long weekend (Feb. 5th until 10th) it was seen by 5.3 million. The biggest night was on February 9th when it got 1.1 million admissions.

Since the release the film has passed the 8 million mark and managed to get into the Top 20 most watched films in the history of Korea Cinema (Ranked #17 with 8.209.116 spectators). We are only half way into February but this could be one of the most watched films this year. 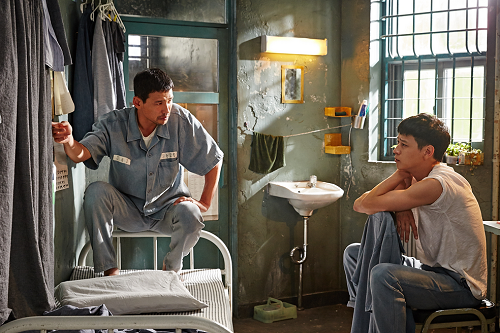 Prosecutor Jae-wook, specialized in violent crimes, detests the criminals and doesn’t give a damn about their human rights. One day, while interrogating Jin-seok, a suspect looking insincere, Jae-wook loses his temper again and beats him. The next morning when Jae-wook comes back to the interrogation room, he finds Jin-seok dead. Jae-wook is charged with murder and arrested. The Prosecutors’ Office including Jae-wook’s boss and close colleagues desperately try to find a way out of this trouble leaving him as a scapegoat. Jae-wook claims his innocence but gets sentenced 10 years to prison. In prison, Jae-wook meets a handsome, even petty criminal, Chi-won and finds the clue of the scheme which put him in prison. Jae-wook asks Chi-won to join forces with him and begins training him to reveal the scheme and get his revenge. (KoBiz)

Watch This Special International Trailer for ‘Master’. The No 1 Film in Korea