We present the first industry report on Korean Cinema for 2016.

In this first month of 2016 more than 16 million persons went to the South Korean cinemas and sales reach over $109 million dollars. Most of the public (54.54%) went to see foreign productions and sales reach $59 million. As far as Korean films they were watched by the 45.46% reaching sales over $49 million. This is the first time in the last four years that the admissions for local movies didn´t pass the 8 million mark. Usually blockbuster movies release during December are accompany with some good release on January, but this year things were different. Despite the continuation of The Himalayas and Inside Men: The Original in cinemas no big release were presented and local films admissions were low. As far as foreign films admissions they stay around the average for month.

Taking into account data from last year we can see that this January there was 25% less admissions than in 2015. Korean film admissions took the biggest hit with 45% less spectators than in 2015. As far as foreign film they show an increase of 8%. Sales also took a big hit with more than $50 million dollars less than in January 2015

This month the most watched Korean Films were: the war drama A Melody to Remember (Contents Panda) by Lee Han with 5.7 million spectators, Mood of the Day (Showbox) by Cho Kyu-jang with 644 thousands and Remember You (CJ) by Lee Yoon-jeong with 425 thousands. As for Foreign Films they were: The Revenant (US) directed by Alejandro González Iñárritu with 1.8 million views, Kung Fu Panda 3 (US) by Jennifer Yuh Nelson and Alessandro Carloni with 1.6 million spectators, and The Good Dinosaur (US) by Peter Sohn with 1.3 million. 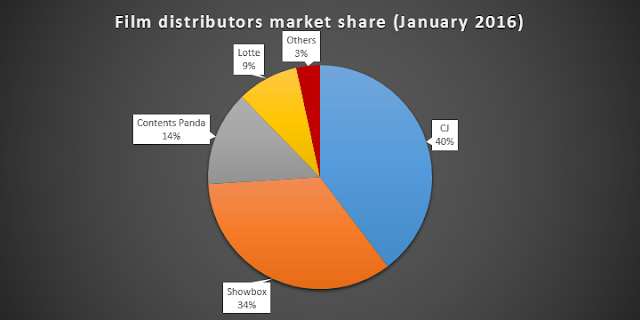 About this report:
This report was made using the information on KoBiz (Korean Film Biz Zone) web page. This special organization is link to the Ministry of Culture, Sports and Tourism of the Republic of Korea.