This month more than 20 million people attended the Korean cinemas with sales reaching over $134 million dollars. Korean productions were watched by most of the public (62.54%) and sales pass the $83 million. As for Foreign films there were watched by the 37.46% of the public and sales reach $50 million. For the first time in the last three years the total number of admissions pass the 20 million mark. The release of A Violent Prosecutor by Lee Il-hyung attracted a lot of people and really made a difference.

Taking into account data from last year we can see that this February there was an increase of 29.24% in admissions. Korean Films admissions went up by 63.32% and Foreign Films went down only by 4.16%. Sales also show an increase of $17 million dollars.

This month the most watched Korean Films were: A Violent Prosecutor (Showbox) by Lee Il-hyung with 9.4 million admissions; Spirits’ Homecoming (M-Line Distribution) by Cho Jung-rae with 1,2 million; and Likes for Likes (CJ E&M) by Park Hyun-jin with only 757 thousand. As for Foreign Films the most watched were: Dead Pool (US) by Tim Miller with 2.7 million admissions; Zootopia (US) by Byron Howard, Rich Moore and Jared Bush with 2.3 million; and Carol (US, UK) by Todd Haynes with 295 thousand. 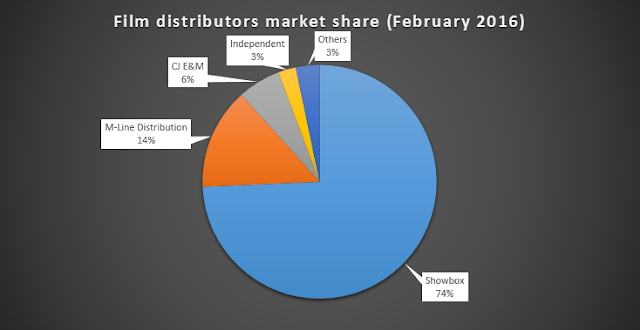 About this report:
This report was made using the information on KoBiz (Korean Film Biz Zone) web page. This special organization is link to the Ministry of Culture, Sports and Tourism of the Republic of Korea.

Watch This Special International Trailer for ‘Master’. The No 1 Film in Korea