Tokue, a 76-year-old woman suffering from leprosy, discovers a pancake (dorayaki)  stall during one of her morning walks. The owner, a bored and in debt middle-aged man named Sentaro, is searching for an assistant and the elderly woman does not hesitate to apply. Initially he refuses; however, upon her insistence and her pointing out a flaw in his recipe, he gives her a chance and ends up hiring her, impressed by her recipe for sweet red bean paste.

Tokue will live out her lifelong dream, cooking in the stall and flooding everything with her kind nature and positive energy, including Sentaro, who strikes a special relationship with her. Unfortunately, when the clients learn of her sickness, they react negatively.

Probably one of the most accessible films of Naomi Kawase, “An” uses the concept of cooking as a subtext, in order to present a bittersweet, though optimistic glance in the lives of the elderly in contemporary Japan, and the story of leprosy in the country. In that fashion, she manages to entail in the film three social comments regarding Japan. The issue with the ageing population of the country, that is one of the biggest discussions currently in Japan, both in terms of financial future, and as a question of how the constantly growing, over aged population could become useful. The second issue is the one of the story of leprosy in the country, with the three Leprosy Prevention Laws, which, theoretically aimed to prevent the disease from spreading, but actually confined the sick in specialized sanatoriums. The last amend to this law was made in 1953, and although it stated that “No one shall discriminate the patients or those related to the patients because of this disease,” it did not do much to remedy the people’s opinion of lepers. All of the laws were repealed in 1996, but, unfortunately, as the script of the film eloquently proves, the ignorance and the subsequent racism towards the patients remain. The third issue is the approach Japanese have to cooking and food in general, which reaches the borders of ritual, although Kawase makes a point that, the traditional way of cooking is gradually lost in the younger generations, particularly because it is time-consuming, and despite the far better results that produces, in comparison to the modern methods.

Kawase focuses on realism and retains a slow pace, which, along with the “mellow” interactions among the characters and the subtle music, makes for a very low-key film. The issue, though, is with the narration, which does not seem to examine the aforementioned subjects in depth, but keeps a somewhat detached approach to them, while focusing on the beauty of the images depicted in the film. The same applies to the subplots, that include the sad story of a female student named Sakana, and Sentaro’s back-story, which are only epidermically examined.

Kawase centered the majority of the film on Kirin Kiki, who gives another sublime performance as Tokue, presenting a quite lovable character and proving, once more, the prowess of older Japanese actors and the skill the country’s filmmakers have in directing them. Masatoshi Nagase as Sentaro and Kyra Uchida as Wakana present their characters on par with the general aesthetics of the film, but are definitively on a lower level than Kirin Kiki.

In terms of technical prowess, though, the film is a true masterpiece, with Shigeki Akiyama’s cinematography and Tina Baz’s editing presenting wonderful images, with those of the cherry blossoms stealing the show, and sequences of cooking that will definitely entice your appetite.

Although “Sweet Bean” does not succeed fully in examining the issues it presents, it is, nevertheless, a film of extreme beauty, which will definitely entice the audience senses, and particularly the appetite.

Eureka Entertainment will release SWEET BEAN (aka AN), in selected cinemas and VOD from 5 August 2016 and as a part of Masters of Cinema Series in a Dual Format (Blu-ray and DVD) edition on 22 August 2016.

The Masters of Cinema release will include High-definition presentation on the Blu-ray, optional English subtitles, a new, exclusive video interview with Naomi Kawase, the theatrical trailer,a  32-page booklet featuring a new essay on the film by critic Philip Kemp, an interview and statement from Kawase, and production images. 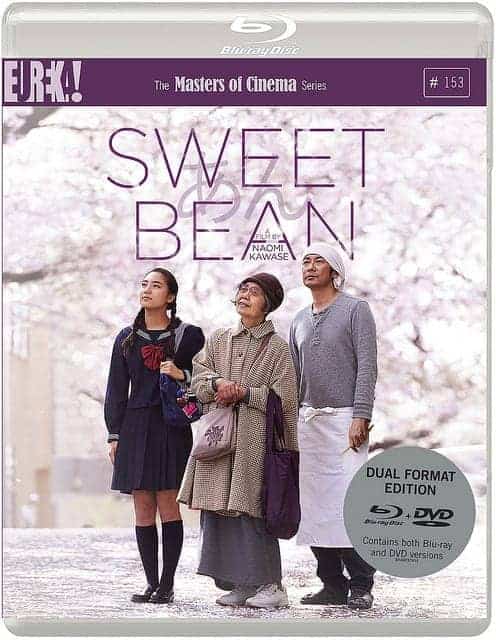