The film is set during the Japanese occupation of the country in the 1930s, and tells the tale of a team of resistance fighters.

A sniper named Ahn Ok- yun, a gun smuggler and graduate of the Independence Military School named Sok-sapo, and explosives specialist Hwang Deok-sam are tasked with the assassination of the governor of Gyeongseong and Kang In-gook, a Korean mogul who is pro-Japanese.

However, Yeom Seok-jin, who is supposedly a comrade, seems to have ties with the enemy, and employs two contract killers, Hawaii Pistol and Younggam to deal with the aforementioned. Things become even more complicated when Ahn Ok-yun‘s twin sister appears.

Choi Dong-hoon tried to infuse a genuine action film with depth, by using historic settings and some thriller elements.

Choi Dong-hoon tried to infuse a genuine action film with depth, by using historical settings and some thriller elements, through the plethora of conspiracies and betrayals that occur in the story. Furthermore, he presented a clear dilemma between patriotism and profit, building upon them most of his script.

However, he did not succeed much, since the characters remain undeveloped, with Yeom Seok-jin being the primary example, since the reasons for his betrayal are never explained.

The “trick” of the twin sister borders on being cheap, as it seems illogical, ends too abruptly, and is obvious that its main purpose is to show Jun Ji-hyun with something else than coarse-cut clothes. I can understand the appeal, but still… 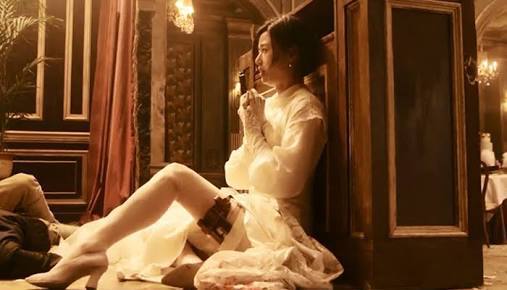 Due to the above, the movie becomes naive and unreal at points, a fact that, nevertheless, is hidden well beneath the impressive action.

In terms of pace and aesthetics, “Assassination” moves quite rapidly, occasionally looking like a music video, and entails a number of the genres’ favorite techniques and notions. These include women fighters, unexpected humor, martial arts, impressive action scenes, and a number of flashbacks.

Regarding the technical aspect, the film is a true masterpiece, as it excels in all the parameters. Ryu Seong-hie’s production design has done wonders with the depiction of the era, which is quite accurate. The artfulness of the costumes by Jo Sang-gyeong and Son Na-ri also helps in that direction.

Kim Woo-hyung’s cinematography and Shin Min-kyung’s editing are also masterful, and are exemplified in the many and quite impressive action scenes, both outdoors and in interiors. The same applies to the action choreography, as exemplified in the duel between Hawaii Pistol and Sok-sapo.

All of the above are magnificently implemented in the wedding sequence, the most impressive part of the film.

In terms of acting, “Assassination” features the crème de la crème of the contemporary S. Korean cinema. Jun Ji-hyun as Ahn Ok- yun is the definite protagonist, and for once, the film does not focus on her looks, but her actual character.

Lee Jung-jae as Yeom Seok-jin and Lee Kyoung-young as Kang In-gook are quite good in the role of the villains, particularly the first, who has the biggest role.

Ha Jung-woo plays the cool and appealing guy as Hawaii Pistol, and Oh Dal-su as Younggam has another comic-relief part, which he plays, though, to perfection.

Cho Jin-woong as Sok-sapo has a role that lingers between the comic and the dramatic.

Not one of them, however, gives a great performance, since the film focuses on the action, and the acting has a definite secondary role.

In the end, “Assassination” is a glorified action flick, in the style of many similar Hollywood productions, but the fact does not take anything away from the entertainment it offers.

The film is part of the great S. Korean selection of the Korean Film Festival in Australia, that will be on until September 25.