Directed by Ho-Cheung Pang , Love In A Puff is a romantic comedy set in the back alleys of Hong Kong, with the changes in the smoking law all of the smokers congregate in small back alley areas to grab a few puffs during work. The plot is pretty bland, the two main characters meet each other, have a few problems and the predictable story conclusion follows.

It’s nothing really new or surprising but the social appeal of the movie is undeniable as it connects with many everyday situations and anyone that has ever had a crush can relate. 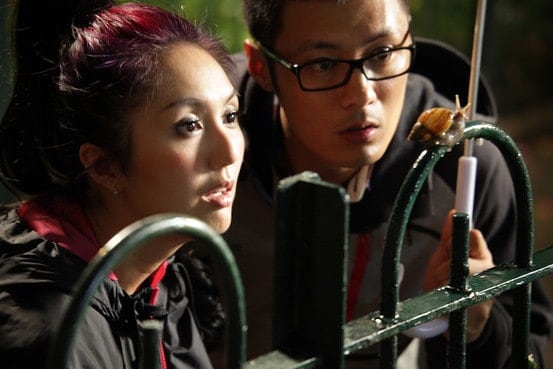 The movie features a group of smokers that meet up at their nearby smoking alley and share tales and stories about their respective jobs.

The group is involved in a number of scenes and does deliver some comedy but the main focus is on the relationship between “Cherie” and “Jimmy” played by Miriam Yeung Chin Wah, also known for her cheerful performance in Love Undercover, and Shawn Yue ( Legend of the Fist ). The relationship starts off on a bad note when Jimmy walks in on a conversation about his former girlfriend turning up to a business meal with a French mans pubic hair on her bracelet, Cherie spends the rest of the movie trying to hide the fact she knows, plenty of laughs when she lets the comments slip.

Individually they both played their parts brilliantly but I did feel they lacked on screen chemistry at times. The movie is play out over five days, so you don’t really get the chance to explore the different levels of their relationship and can be left feeling detached at times. I didn’t feel they gave enough background information about the main characters and some of the romantic parts of the movie did seem a bit effortless.

With the very basic approach to the story and the characters interactions outside the main relationship; the cast really needed to deliver to make this film entertaining.
I was really impressed by the soundtrack of the movie; it bought comedy and romance together almost perfectly with emotion provoking lyrics and light hearted and cheerful melodies. I’m not a huge fan of the genre but I don’t think I will see a better romantic comedy for a long while, a very relaxed and subtle movie that can have you giggling away, perfect if you’re after a quiet night at home with someone special.

Film Review: The Brink (2017) by Jonathan Li Screening at Fantasia