“Your Name” has already become an international blockbuster and “In this Corner of the World” has won the Japanese Academy Award for Best Animation, but it seems the industry had even more to offer in 2016, and “A Silent Voice” is a great testament to the fact. The movie is based on homonymous manga written and illustrated by Yoshitoki Oima. 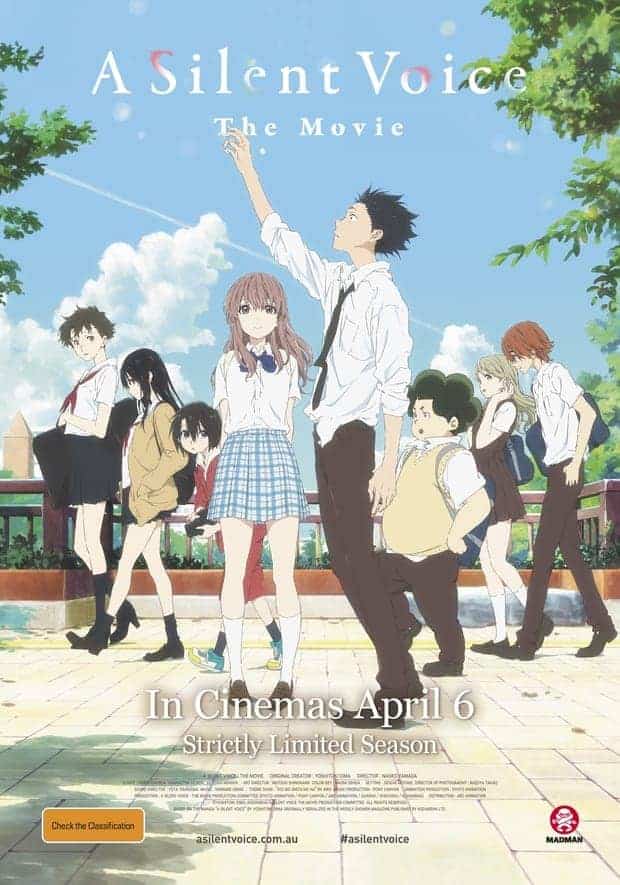 The story revolves around Shoya Ishida and starts when he is attending elementary school. Shoya is a sort of delinquent (as much as one can be during elementary years) but is quite popular in the classroom, sitting in the same desk with a girl, Naoka Ueno, and having two very loyal friends. However, things change completely when a new student arrives in school, Shoko Nishimiya. She is proven to be deaf and due to that has some speech impeachment. Despite her being a kindhearted girl who even wants to become friends with Shoya, he starts bullying her, and soon after Naoka does the same, although in verbal fashion, for the most part. However, things go too far when this continues for quite some time, and Shoya’s mother is forced to transfer her to another school. This incident turns the whole classroom against Shoya, making him a pariah, despite his mother’s efforts who makes him apologise to Shoko and her mother. His status remains until high school, with Shoya having no friends whatsoever, to the point where he decides to commit suicide. At the last moment, though, he decides against it and instead goes to find Shoko. He even makes a friend, another loner named Tomohiro Nagatsuka, and after getting reacquainted with Shoko, the two of them embark on a trip of reconciliation with the “old gang”, including Sahara, another former classmate, and Naoka The process, though, does not prove easy, at all.

Naoko Yamada presents a sensitive and tender perspective to a number of issues in the contemporary Japanese society, and through them, depicts what it means to be Japanese, nowadays. In that fashion, the anime deals with bullying, and the concept of the bully becoming the one bullied, cruelty among children, suicidal tendencies, friendship, regret, apology, family, forgiveness, change and evolving, all of which are present through a coming-of-age setting that highlights them in the best way possible. Yamada uses some original and quite impressive techniques to depict all of the above. The X’s on the faces of people around Shoya, that symbolize the fact that he has chosen to ignore them as much as they have, is a great sample of this tendency, while the moments that these X’s are removed comprise some of the best scenes in the film. The frequent depiction of the character’s shoes, whose purpose is revealed toward the end, is another trait, while the narrative, that actually goes back and forth in time also helps the presentation of the story.

Some minor fanservice could not be missing, but overall, Yamada keeps a very serious tone throughout the film, with some comic relief moment, mostly presented through Nagatsuka, and a turn for the dramatic, during the end of the anime. The only issue I found is that the film lags a bit towards the middle, in a tactic that results in its duration surpassing 120 minutes. Even this fault though, is minor, and does not detract much from the general elaborateness of the title. I also found the fact that the supernatural is completely absent, quite refreshing.

Technically, “A Silent Voice” is truly masterful. Futoshi Nishiya has done a great work in the character design, with the attention being on detail (watch the label always showing on the back of Shoya t-shirts to understand what I mean, at least if you are not suffering from any kind of OCD) and the diversity among the characters. The animation is also impressive, with the character’s movement focusing on realism, and the same applies to the surroundings, all of which are presented with a distinct focus on realism and attention to detail, despite the fact that the setting changes quite a lot. In that fashion, Kazuya Takao’s cinematography is truly impressive.

A number of very interesting characters, the thorough social comments, and the artistry in the technical department deem “A Silent Voice” a definite anime masterpiece.

Trailer for New Anime Film “Weathering With You”