The collaboration between Eiji Uchida and Third Window Films has proved quite fruitful, being in the process of even creating a specific style, which begun with “Lowlife Love” and continues with “Love and Other Cults”. 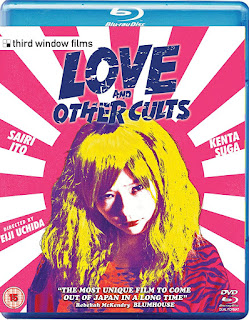 Ai is a girl who seems to get no break in her miserable life. Her father is nowhere to be found, and her mother is a religion fanatic, although not with a specific one, but with the concept of joining different cults constantly. Not interested in her daughter even a bit, she unburdens her into the hands of her latest cult. The girl manages to find some semblance of peace in that community, but this sentiment is shattered when the leader of the cult, a westerner named Lavi is arrested and the cult disbanded. Ai finds herself in school, where she does seem to fit a bit, although not for long  Her odyssey to find someone to love her, a place to fit in, and a true self continues to a gang of delinquents, a traditional family, and eventually, through hosting and whoring, to the porn industry. All the while, Ryota, a classmate of hers, seems to stumble upon her on random occasions and timeframes, in a romantic story that does not seem to lead anywhere.

A second axis of the film involves a gang eventually Ryota and Ai become part of, consisting of a blonde-haired aspiring Yakuza named Yuji and his huge black friend, Kenta, who is the “muscles” of the group. The three of them work for a low ranking Yakuza named Kida, but everything seems to change when Kenta meets a woman he likes.

Eiji Uchida directs and pens a film that revolves around a number of stories: Ai’s life, Kenta’s love for her, Yuji’s effort to become a gangster, and Kenta’s love for the girl he meets. All of the characters want to change their lives, but keep failing. Ai, in her despair to find a place to belong, repeatedly changes her appearance and her character, but fails to achieve her goal, with all her efforts ending in tragic consequences. Kenta wants to raise money and leave for Tokyo, but his love for Ai and a number of episodes with the gang hold him back. Yuji is a delinquent, who thinks that his only path to success is through violence and by becoming a Yakuza, only to realize, eventually, the cruelty of the crime world. Kenta wants to abandon the gang and live a quiet life, but he also discovers that leaving the world of crime is not an easy task.

Through these stories, Uchida presents his view on the delinquents and the misfits of the modern Japanese society, who, according to him, are just like everybody else, as they also search for love and a sense of purpose, but have just been unlucky in their lives. The presentation of their lifestyle is realistic in general, although some extreme comedic episodes, like the introductory scene, and some surrealism, as in the scene where Kenta meets the girl, are also present. At the same time, Uchida seems to mock the whole concept of the religious cults, presenting them as exploitative organizations, with no actual purpose. The repeating sequence of Ai moving her hands in the air in a ritualistic fashion, as she learned in the years she spent in the cult, is a testament to this tactic.

The sole fault in the narrative comes from the abundance of characters, with Uchida having to cut their stories a bit short at times, in order to fit them all in the 95 minutes of the film’s duration. This aspect results in the various episodes appearing somewhat disconnected at times. However, it becomes obvious that if Uchida had a bigger budget in his hands, he would have presented them in full. This is a low budget film, after all.

Maki Ito’s cinematography does a great job of highlighting the rundown urban setting of the film with realism, in a very difficult task, since the story takes place in a plethora of locations, both exteriors and interiors. Masaki Komino’s editing retains the relatively fast pace of the film, while Hiroyuki Onogawa’s mostly punk soundtrack provides a great background for the action.

The acting of the film is on a very high level, featuring impressive performances by the entire cast. Sairi Ito anchors the film, having the biggest role, and is outstanding in the presentation of different personas throughout the movie. Her despair and her extreme choices are matched by a genuine kindness her character seems to emit at all times. Anthony, a comedian who stars in a movie for the first time as Kenta, is also great in the role of the kind-hearted giant, portraying elaborately both the roles of the thug and the romantic. Kaito Yoshimura acts in the usual, extreme fashion so frequently met in Japanese cinema as Yuji, with the hyperbolic gestures and facial expressions. However, this way seems to fit his character, who borders on being a sociopath.  Kenta Suga is also quite good as the archetype of the school delinquent, although his love for Ai lingers, in a way, outside the norms of the role. Denden is as cool as ever in the role Kida

Eiji Uchida continues his efforts to radicalize the Japanese indie film, and “Love and Other Cults” is a big step towards that direction.