If one believes one of the leading experts on Asian, especially Japanese cinema, Blues Harp by Takashi Miike is “the film that will shed much-needed light on the hidden sides of that genuine filmmaker Takashi Miike”. In a year which can be regarded as one of the quieter years in the career of the director in terms of the film made, “Blues Harp”, together with “The Bird People in China” and “Young Thugs: Nostalgia”, defines indeed an emotional, even melancholic side of Miike, a name many film-goers and critics rather associate with excess, violence and and the ludicrous. 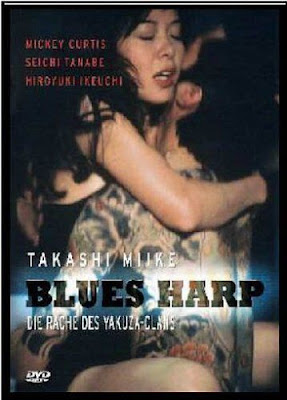 As with his “Black Society Trilogy”, especially “Rainy Dog” and “Ley Lines”, Miike has proven himself to be a director of many facets, even though his themes – the outsider, masculinity, violence and family units – have stayed at the core of most of his films. It is interesting that a director such as Miike is more likely to be praised for the outrageous opening of “Dead or Alive” or the torture scenes in “Audition” and” Ichi The Kille” rather than for his, at times, touching depiction of outcasts within society, his compassion for them and their problems.

“Blues Harp” is one of the many links to this side of the director as well as his ambition for music. With the art of making music or, to be precise, playing an instrument such as the harmonica (like the character of Shuji (Hiroyuki Ikeuchi) does), can be an escape when the world around you sinks into chaos or rejects you.

Shuji is a bartender in a small bar where local bands play occasionally. One night, local yakuza Kenji (Seeichi Tanabe) runs into him as he is having a smoke outside while being chased by rival gang members. Badly hurt, he hides in the alley and, much to his surprise, Shuji hides him and tells his pursuers to go in a different direction. After one of the visitors of the club, Tokiko (Saori Sekino), has taken care of the gangster’s wounds, Kenji swears he will return the favor one day.

As Shuji starts a relationship with Tokiko, Kenji’s plan to take over from his boss reaches its final stage, while the two of them risk everything to reach their goal:  finally escape the streets. However, their destinies are more closely connected than they thought, with dramatic consequences for both.

As Kenji wakes up in Shuji’s apartment, after sleeping on the couch, recovering from the violent events of last night, he looks at the man who probably saved his life. Still asleep, Shuji twists in his bed with most of his body uncovered, while a longing gaze of the gangster accompanies his every movement, before he awakes and the two of them have breakfast together.

Captured through the use of POV shots as well as long takes, there is a strong sense of homosexual tension within Kenji, a man deeply embedded within the rigid hierarchy of the yakuza, an organization unwilling to tolerate any “transgression” of that sort. It is a powerful, and not the only, moment which we see through the attentive lens of Hideo Yamamoto, a Miike regular ever since their first collaboration for “The Way to Fight”. The gaze of the character highlights the longing for a more fulfilled connection with the world around him, although social or cultural constraints make this enterprise next to impossible. 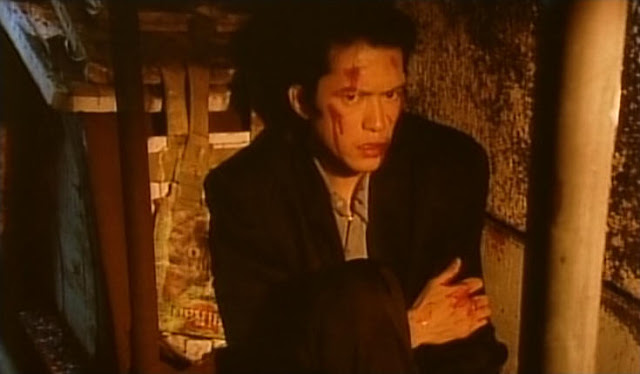 In the world of “Blues Harp”, the project of integration has failed for the characters. While Shuji, having an African-American soldier for a father, lives on the outskirts of Japanese society, being a bartender at night and small-time drug dealer during the day, he has come to terms with his status. At the same time, Kenji is seemingly integrated within the Japanese mob on the outside, with his sexual orientation as well as his ambitions to rise at the top of the criminal food chain marking him as an outsider, one who even has to clean himself thoroughly after having sex with a female. For Kenji, it is a precarious balance, as also Tom Mes points out, to hide his true personality because of his ambitions. Actor Seiichi Tanabe plays this man as a mixture of the typical hard-boiled gangster and a certain vulnerable undertone, especially in his relationship to Shuji, a man he feels devoted to.

On the other hand, Hiroyuki Ikeuchi’s Shuji is a detached man, content standing behind a bar or talking to people on the streets of his neighborhood, selling drugs. As he has learned to play the harmonica when he was a child, the sad tune he plays seems comforting, a melody of strange beauty which he plays when feeling alone. In an early scene, we see him as a child playing the tune with his mother entertaining one of her “customers”, a way not only to escape but also to find a way to express a pain almost unbearable to keep inside. When the adult Shuji discovers his talent as a musician, encouraged by a band leader (Atsushi Okuno, who also made the music for the film), he finds another option for himself, emphasizing the redeeming quality of music as suggested by film.

As with later features by Miike, “Blues Harp” almost feels like a piece of music itself, one which changes tone and rhythm highlighting the emotional state of the characters. Whereas music and sound has been a mere reinforcement of aspects of the film, the flow and the composition of visuals and audio seems to be more confident than in previous films. Supported by the editing of Yasushi Shimamura, another regular Miike-collaborator, one might even look at certain scenes as imitating a music-video aesthetics, foreshadowing the opening scene of “Dead or Alive” to name one example.

“Blues Harp” is one of Miike’s more melancholic features, one which is unjustly overlooked when talking about the director as it offers not only a valuable insight on how fluent Miike has become in the language of the medium but also on the versatility of him as an artist. Featuring great performances, a wonderful soundtrack as well as a brilliant collaboration between editing, camera and music, “Blues Harp” is a recommendation to those film fans eager to see the director doing something other than his “usual” excess. It is a film about the outcasts, those left behind and ignored, those who find refuge in the sombre tunes of the harmonica, a soothing melody lighting the dark streets of Tokyo.