Takashi Miike has answered the “Can a film be so bad that is good?” question affirmatively a number of times, and the “Katakuris” is definitely among the movie that provide a positive reply. 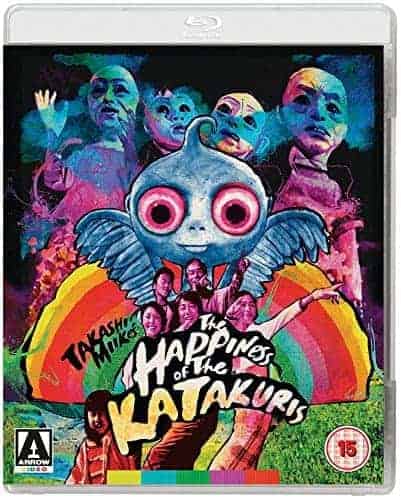 The script is loosely based on Kim Jee-woon’s film, “The Quiet Family”, but Takashi Miike took the basic premises of the original and turned them completely upside down, in order to present a movie that lingers between the musical and the thriller, also including elements of slapstick comedy, parody and claymation.

The Katakuris are a four-generation family of failures: patriarch Masao Katakuri, his wife Terue, his father Jinpei, his formerly criminal son Masayuki, his divorced daughter Shizue, her child Yurie and their dog, Pochi. The family uses the father’s redundancy pay to purchase an old home in the country, near Mount Fuji, in order to convert it into a bed and breakfast. However, their customers are very few and furthermore, all of them end up dead. In order to avoid bad publicity, they bury them in the back of the establishment. Eventually, a nearby volcano erupts, and fraudsters, criminals, and zombies enter their life.

The film is, once more, a collage of the preposterous notions lurking in Miike’s mind, which ends up as a farcical parody. The script loosely makes fun of “the original, there is clear mocking of “The Sound of Music”, there are ridiculous scenes of dancing and karaoke, and an obviously Japanese individual, who wears a uniform of the Royal British Navy and claims to be the nephew of Queen Elizabeth II by speaking Japanese in a supposedly British accent. The movie also features a number of singing and dancing scenes, which Miike insisted to be shot with just a few rehearses in order to appear asynchronous, (and really bad if we want to be frank), while the zombies are portrayed in the most ridiculous fashion.

Add to that the preposterous sequences of claymation, which have been actually used instead of special effects, and a number of notions that could be perceived as both hilarious and offensive (the sumo wrestler who comes to spend the night with his underage girlfriend for example) and you have the backbone of an authentic Miike movie.

The cast includes some impressive names, like veterans Kenji Sawada, Keiko Matsuzaka and the late Tetsuro Tanba, along with some new (at the time) talent, like Shinji Takeda and Tamaki Miyazaki, who also acts as the film’s narrator, most of which have a background in music. However, in this chaotic setting, no one seems to thrive particularly, since their acting is restricted in them trying to keep up with the completely illogical events that appear on screen. The one who steals the show though, is the late Kiyoshiro Imawano, who gives a hilarious performance as “Captain” Richard.

“The Happiness of the Katakuris” is a film almost solely addressed to fans of cult, while Miike proves, once more, the reason he is considered as one of the most unique filmmakers alive.