“Terror in Resonance” is quite an exception for the anime world, since it is one of the very few occasions (I have to admit I do not know any other similar case) where a series is not based on a manga, but simply on the imagination of four scriptwriters (Kenta Ihara, Jun Kumagai, Hiroshi Seko, Shoten Yano). Furthermore, and particularly due to Shinichiro Watanabe’s direction, whose previous work include “Cowboy Bepop” and “Samurai Champloo,” “Terror in Resonance” is a truly great title. Let us take things from the beginning though. 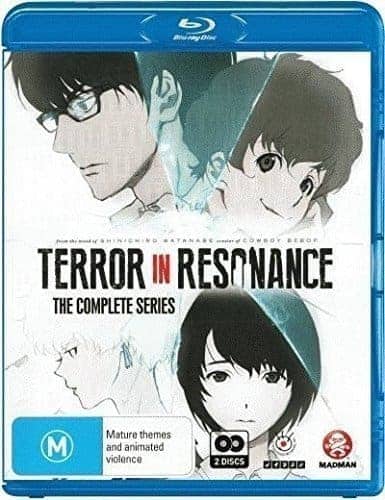 In an alternate version of the present, Tokyo has suffered a truly intense terrorist attack that has left its marks on all aspects of society. When a nuclear weapon is stolen from a secret military base, and soon after, an attack is launched by two strange individuals who have taken responsibility by posting a video on-line, the whole government mechanism has a fit. Soon, a task force is assembled, headed by Kurahashi, with a mission of solving the enigmas the two perpetrators leave, but it is Kenjiro Shibazaki, an ex-detective who has been demoted to the records division, that has the most success in solving them. As we learn more about the two “terrorists,” Nine and Twelve, another agenda comes to the fore, while Lisa Mishima, a student, gets tangled with them by chance, and Five, an agent of the FBI takes over the investigation.

Shinichiro Watanabe directs a title that thrives in terms of both story and narrative. Taking the Hiroshima bombing and the 9/11 incident as a base, Watanabe has created an intricate case, filled with sociopolitical commentary. In that aspect, the series deals with the concepts of family and friendship, professional relationships and the concept of duty, terrorism, public opinion and the way popularity is shaped, corruption, the one-sided relation between the Japanese and the US government, and eugenics, while it also includes subtle elements of romance.

The element that stands out though, is the crime-solving aspect, with both the riddles and their solution highlighting the intelligence and the knowledge of the scriptwriters, while forming one of the better axes of the story. This element, along with the great narrative that unfolds the various layers of the story in a truly elaborate way, are the main reasons for the sense of agony that permeates the series, and is actually carried until the great, and quite heartbreaking finale. Yoko Kanno’s exceptional music also intensifies the above sense, while it also stresses the “calmer” moments.

The animation by Mappa is also great, in perfect harmony with the title’s aesthetics, which follow a realistic path, for the most part, although the various action scenes and the many explosions are truly impressive. The colors are mostly in grey and dark tones, which also induces the anime with a noir essence. Nakazawa Kazuto’s character design is another of the production’s traits, with him creating a number of distinguishable characters, most of which feature western facial characteristics.

“Terror in Resonance” is one of the best anime series of the latest years, particularly due to its intricate story, great direction, and impressive visuals.

Terror in Resonance is available from Madman Entertainment