Quite a legendary entry in the history of Japanese cinema, Teinosuke Kinugasa’s “A Page of Madness” was lost for 45 years, until it was rediscovered by the director in his storehouse in 1971. However, the print existing today is missing nearly a third of what was shown in theaters in 1926, while the fact that it does not contain intertitles, since it was screened with the presence of a benshi (source: Aaron Gerow (2008). A Page of Madness: Cinema and Modernity in 1920s Japan. Center for Japanese Studies, University of Michigan), makes it quite difficult to follow, even more due to its avant-garde and experimental nature. Its cinematic impact however, cannot be denied in any way.

Having secured a distribution contract from Shochiku, Kinugasa formed the Kinugasa Motion Picture League, an endeavor that almost broke him financially, to the point that the actors of “A Page of Madness”, (some of which, like Masao Inoue, were big names at the time) had to help paint sets, push the dolly, and make props. He had only eight small lights to work with; so he painted the walls of his small studio silver to make them reflect additional illumination. The movie was shot over a relatively long period for the time, an entire month, and since Kinugasa could not afford accommodations for his actors, they slept on the set or in the front office.

Due to its aesthetics, the movie was released in cinemas specializing in foreign films, but, to everyone’s complete surprise, it was at once a big success. At the Shinjuku-Musashino-kan, it grossed over a thousand dollars a week, in period when the admission price of films had fallen to the equivalent of five cents or under. The money was most welcomed to the almost bankrupted Kinugasa, who has to move the film personally from Kyoto to Tokyo, to prevent his creditors from seizing it. (source: Joseph L. Anderson and Donald Richie (1982) The Japanese Film: Art and Industry, Princeton University Press)

The script is the result of a collaboration between Yasunari Kawabata, Kinugasa, Banko Sawada, and Minoru Inuzuka; however, as mentioned before, it is quite difficult to describe. Nevertheless, what we can say about the story is that it revolves around a retired sailor, who has become a custodian at a mental hospital to be closer to his estranged wife, one of the patients at the facility. Their daughter is soon to be married, but the father’s fear and pain surrounding his wife’s mental state, threaten the future happiness of the family. As time passes, a number of violent episodes take place inside the asylum, while the custodian also seems to lose his grip to reality, particularly due to his failures to set his wife free.

The film could not have a more fitting title, since it actually functions as a page of madness, initially due to the circumstances in the asylum, but eventually due to what is happening in the custodian’s state of mind. In order to present this state of madness, which one could say is a depiction of what is going on in the minds of the patients, Kinugasa uses a number of flashbacks and rhythmic intercutting, which intensify the depiction of the illogical occurrences that take place in both reality and in the custodian’s mind, with the borders of the two becoming almost non-existent, eventually.

The combination of the images presented on screen, the aforementioned techniques, and the impervious, and quite fitting music by the Alloy Orchestra (who produced a new score for the film) result in an audiovisual extravaganza, a truly impactful experience, that is quite difficult to explain to ones who have not witnessed the film. The scenes where Eiko Minami is dancing, the riots, the various “dreams” the custodian experiences, the scene with the mask, and the scenes where violence erupts, are among the strongest ones, while the movie frequently functions as a freak show, where the patients play the role of Erinyes for the custodian’s past sins. 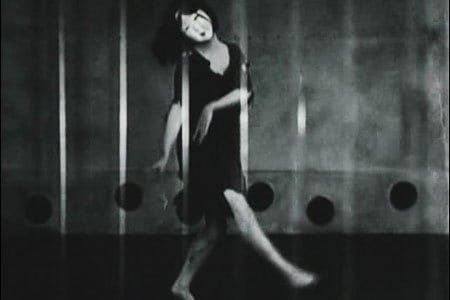 At the same time, through impressionistic symbolism, Kinugasa manages to deal with a number of social issues, as is the very Japanese “feud” between obligation and will, tradition, and the way mental illness was perceived at the time, all the while maintaining a rather realistic portrayal of the way asylums would function at the time.

The silent acting is also on a very high level, with an outstanding Masao Inoue presenting a regretful man who gradually loses his grip with reality, as he anchors the film in impressive fashion. Ayako Iijima highlights her frustration for what is happening in her life and her inability to change any of it quite convincingly, with the same applying to Yoshi Nakagawa as the custodian’s wife. The ones who steal the show, though, are Eiko Minami as the dancer and Kyosuke Takamatsu as the bearded inmate, with their presence being relatively brief but quite impactful.

I do not have much to say about this masterpiece, if you enjoy (Japanese) cinema, just buy the Blu-ray listed in the article, or even better, try to catch a screening of “A Page of Madness”, as the ones presented last year by the Japanese Avant-Garde and Experimental Film Festival and Camera Japan. You will definitely not regret either.

Note: I have to admit that I am not fully qualified to understand every aspect of the film, and thus, I have leaned heavily on the aforementioned books, and the notes and the interview featuring in the Blu-ray, although my personal opinion is still present in the article.