Following the “guidelines” of the extremely popular in the 80’s Hollywood (still actually) theme of the “underdog who succeeds against all odds” and combining it with the equally popular concept of the “true story”, Nitesh Tiwari has come up with a highly entertaining movie, which eventually became a huge commercial success. “Dangal” became the highest-grossing Indian film ever, the fifth highest grossing non-English film ever, and 2017’s highest-grossing sports film worldwide. Produced on a budget of ₹70 crore (US$11 million),  the film grossed over ₹2,100 crore (US$320 million) worldwide, including more than ₹1,300 crore (US$200 million) in Chinese markets, becoming one of China’s top 20 highest-grossing films and the highest-grossing non-English foreign film in China. The film has also been watched about 400 million times on Chinese streaming platforms. 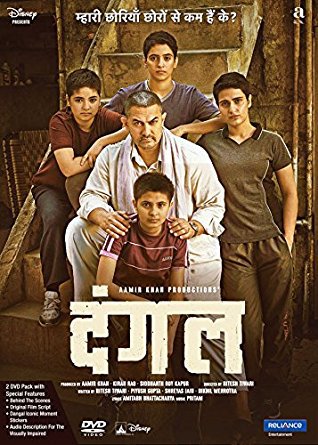 Mahavir Singh Phogat is a former amateur wrestler and national champion residing in Balali. His dreams of winning an international medal for India were crushed by reality, as his father forced him to abandon the sport in order to get a job, since wrestling at the time, was not enough to earn a living. In 1988, a currently married Mahavir has decided to fulfill his dream through his children, but unfortunately, and despite a number of “spells” and “secret recipes” proposed by his fellow villagers, he finds himself with four daughters.

As his hopes are to be completely shuttered, he finds out that two of them have beaten severely two boys, and an idea comes to his mind: To make Geeta and Babita international champions in wrestling. Thus, a sever year of training begins, with the girls being forbidden from eating any oily or spicy food, to wake up at 5 am every day to run and train, and in general, to devote all of their lives to their father’s dream.

The girls have to face Mahavir’s strictness, public prejudice, since, at least in the area, women wrestlers were unheard of at the time, and a number of other difficulties, as the lack of money for training and the fact that they could only fight male wrestlers their age. Eventually though, both of them manage to get into the National Sports Academy. There, however, new challenges await both the girls and the father, particularly revolving around their coach, Pramod Kadam.

Nitesh Tiwari directs a very entertaining film that combines sports, comedy, and drama in a delightful, albeit quite light approach. In that fashion, the girls’ relationship with their father, who is set to “use” them to fulfill his dreams is epidermically examined, despite the fact that it forms one of the basic axes of the narrative. The same applies to their relationship and the role of their mother, with Tiwari evidently taking the side of the father in all the “feuds” that result in the movie, and particularly the one with their coach, who is presented with the bleakest colors, as a very incompetent man who puts his career above the girls he trains.

Although in terms of substance the movie has its issues, in terms of impression and presentation, it truly thrives. The depiction of the village and its inhabitants, the training sessions, the interior of the house, the various locations the girls wrestle at, and the NSA and tournament venues is exquisite, as it highlights Setu’s cinematography and Ballu Saluja’s editing. Their combination finds its apogee in the matches, which are impressively, but also realistically portrayed. Pritam’s music also plays a significant role in this presentation, and particularly in the fast-track sequences, which are presented much like music videos. Furthermore, the main, homonymous track is quite fitting, and will definitely remain with you long after the movie is finished.

Amir Khan is great as Mahavir, portraying with gusto a father obsessed with his dream, but who also loves his children deeply, while his built also benefits his role the most. Fatima Sana Shaikh as Geeta (whom actually the film focuses the most on) is also quite good, highlighting both her love for her father and the sport, but also her rebellious nature. Aparshakti Khurana as cousin Omkar provides a comic relief part quite nicely, Sakshi Tanwar as Mahavir’s wife shows her agony and inability to do anything to protect her daughters from her father’s wishes quite convincingly, while Girish Kulkarni as the coach at NSA provides a fitting “villain”.

“Dangal” is a very entertaining movie, in Hollywood fashion, that will definitely satisfy all fans of the themes mentioned in the prologue.