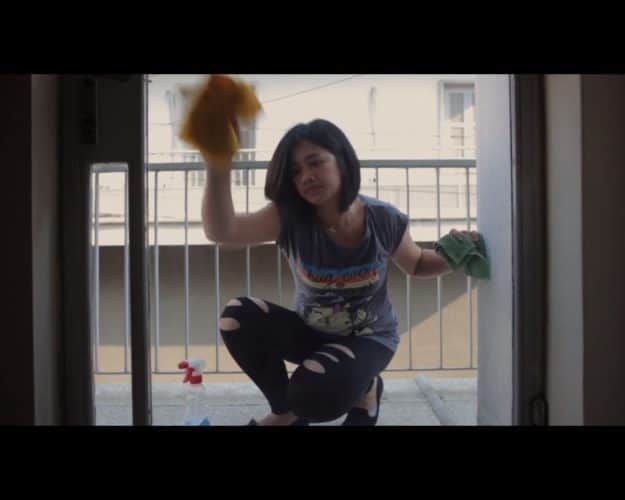 “Now the time has come to leave you”

Ever since we have entered what might just be one of the final stages of globalization, with the rise of digitization, especially through social media and the omnipresence of online technology, people, companies, politicians and nations are faced with re-defining the essentials of our lives. Interconnectedness goes hand in hand with a new concept of work and of the worker as well, all of which boils down to the increasing importance of transnationalism, according to Management Practice Professor Lynda Gratton. While globalization is mostly regarded as a political or economic issue, what seems to be lost in the discussion is how it has slowly changed other, more individual concepts, such as the idea of home and the definition of “family”.

In her new documentary “Together Apart”, German-born director Maren Wickwire takes a closer look at these changes, focusing on Filipino domestic workers in Cyprus. Wickwire and Manifest Media, a production and design company she founded, have made it their task to look at issues of transnationalism and “vulnerable and marginalized people groups”. Whereas most media coverage anonymizes these groups through telling individual stories, these people are given a face, a comprehensible narrative to raise awareness as well as discussion about their issues.

Regarding Filipino workers in Cyprus, their status in their country of origin and in Cyprus is somewhat unique. As Wickwire explains in an interview with Christiane Sternberg for the Goethe Institute, without these workers the island would be nearly “paralyzed”. At the same time, the money they send home to their relatives defines the “backbone” of the national economy and the growth of the Philippines, as the opening titles of the movie mention. According to a 2005 study, around 35% of all immigrant workers are domestic workers – they look after children, take care of elderly people or clean houses and apartments – and due to unequal access to the labor market, especially female workers become victims of exploitation. With events such as the EU-IMF bailout of Cyprus in 2013, conditions are likely to become increasingly difficult for many Filipino and Filipina workers.

At the core of the film is the story of two women, Guil Ann (25) and her mother Carren (50), both of which work in the domestic industry of Cyprus, as nannies and cleaning ladies. While the rest of the family remains in the Philippines, the only contact the two women have been occasional video chats and phone calls. Part of their salary, which is around 300 euros monthly, goes to their families.

When all of a sudden Carren is arrested by immigration services and deported back to the Philippines, Guil Ann has to face the difficulty of being alone in Cyprus, her monthly pay the most important source of income her family has. Carren, on the other hand, finally questions whether she can go back to Cyprus or to any other country at her age. Additionally, she also has to become adjusted to living in an environment which has somehow become strange to her.

One of the key themes of “Together Apart”, as the title already indicates, is the issue of bridging distance. When Carren and Guil Ann’s son go to the backyard of her house trying to chat with the young woman, the connection is repeatedly interrupted, words and finally whole sentences are being lost in the white noise of the short intermissions. The young boy, eager to speak to his mother, slowly becomes disappointed while his grandmother tries her best to comfort him, reassuring him it will work next time. At the same time, when Guil Ann calls her mother, as she is still in a Cypriot prison, Wickwire’s camera shows static images of the prison, the cells, the meeting rooms and the dark hallways.

As a result, distance is an omnipresent theme in the film, an almost physical entity. Voices have an almost ghost-like quality to them, sounds of people who are not only far away geographically. While financial concerns define their lives mostly, the toll of being apart becomes clearer as their stories continue, most significantly because the two women, despite being mother and daughter, never actually meet. Pictures, cell phones and computers mediate the relationship, the feeling, the exchanges between relatives over long distances, and while one could simply book a ticket to the Philippines, it is paradoxically also a family which binds them to Cyprus. Guil-Ann and Carren, in what seems to be bitter irony, remark on the possibility of having seen the children of their employers more often than their own.

However, despite these depressing realities there is another connecting factor besides soulless (and unreliable) digital communication. In the aforementioned interview, Wickwire highlights how dreams of “mastering your life” constitute an important feature of the lives of Guil-Ann, Carren and so many others in their situation. Although exploitation and the danger of being deported are still present, there seems to be a constant refusal of making these aspects more relevant than the concept of the dream, the “longing of our hearts” as Carren calls it. Besides scenes showing Carren singing, it is the constant contrast between rural and urban spaces supporting this idea. On the other hand, the intensity of colors, the use of natural lighting  and the impersonality of the city, the scenes of Guil-Ann taking part in dance performances or karaoke add an important, personal layer to the film’s narrative. One has to define both of these women through their personality, their insistence of independence and individuality, especially through their dreams.

“Together Apart” will likely stay in the mind of its audience, and it does so thanks to the stories of these two women, Wickwire’s direction and cinematography. Even though the pieces of information regarding Filipino and Filipina workers framing the film cast a more pessimistic shadow, the greatest strength of “Together Apart” is perhaps not in the way it calls to action. If these women have not given up on their dreams, it is the duty of all of us to not let the opposite happen. In the end, globalization has a human face, such as Guil-Ann’s or Carren’s, and we should always be aware of that.

Documentary Review: I’ve Got a Little Problem (2017) by Zhang Ximing

Fantasia Interview with Hao Wu: They feel trapped and want to leave the virtual world.