The class of heroes return to face their biggest challenge yet when “My Hero Academia” Season Two, Part Two springs into action on DVD and Blu-ray™ on June 11, courtesy of Sony Pictures Home Entertainment. With the U.A. High Sports Festival behind them, young Izuku Midoriya and his peers are assigned superhero internships when the work experience gets a little too real – a serial killer with super-powered bloodlust is on the loose and on a collision course with our fletchling heroes in the exciting finale to the anime’s acclaimed second season! 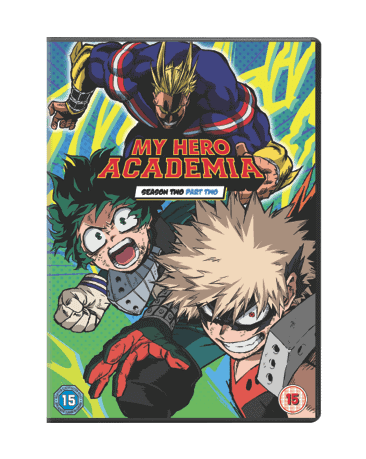 Based on Kōhei Horikoshi’s New York Times best-selling manga from Weekly Shonen Jump, the iconic home of Dragon Ball Z and Naruto, “My Hero Academia” is a coming of age story against the backdrop of a world where superheroes are not only real, but a viable profession. Izuku “Deku” Midoriya is one of the few born without a “quirk” power, but that won’t stop him from enrolling in the prestigious U.A. High School to chase his dream of becoming the next symbol of peace, like his idol and mentor, All Might.

Our young heroes start their first internships with real pros! Put on blast by some serious training, Deku will see how far he can push his new skills when a classmate gets cornered by Hero Killer: Stain. The fight leaves a lasting impression before Class 1-A goes back to the grind for final exams. Setting aside rivalries, the students face their toughest opponents yet—their teachers.

“My Hero Academia” Season Two, Part Two contains 13 episodes with an approximate run time of 25 minutes each and is not yet rated.

MY HERO ACADEMIA SEASON TWO, PART ONE On DVD and Blu-ray™ April 2