I always thought that combining Johnnie To’s style with the Korean, crime/action film aesthetics would be a great idea, and, finally, the moment of truth is upon me, as Lee Hae-young adapts “Drug Wars”, probably To’s best movie in the current decade. “Believer” has already become the first Korean film to reach 1 million moviegoers in 2018 and the fastest Korean movie to reach 3 million moviegoers this year.

“Believer” is screening across cinemas in the US and Canada starting June, 08, by Well Go USA 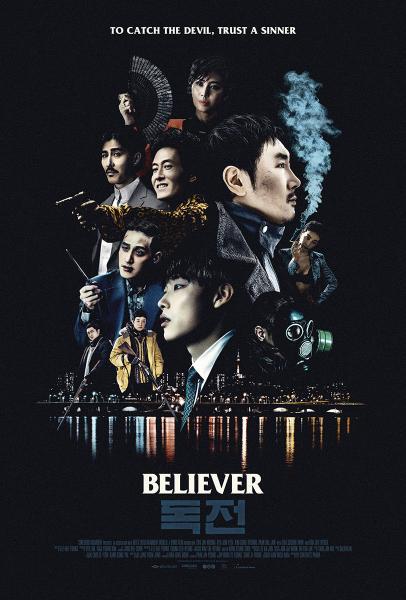 As usually, I will not examine the connections and similarities with the original, but I will focus on this one as a separate entity.

Won-ho, a police detective has been on the hunt for Asia’s biggest drug cartel, and particularly its boss, a man no one seems to have met, named Lee. When a fire in one of the cartel’s secret houses ends up killing a number of people, Won-ho finds himself with a valuable “asset” in his hands: Rock, a low employ of the organization, who has, though, a key role in the cartel. Using him as a bait, Won-ho and his team try to reach the highest level of the syndicate, man by man, while a negotiation with Jin Ha-rim, a Chinese kingpin, is taking place for the cartel, through Rock and his direct higher-up, Park Seon-chang. Things, however, do not go as planned, for anyone.

Lee Hae-young directs a crime noir thriller that benefits the most from the way the case is built and the characters are introduced, like in an RPG game, where the “heroes” level up and get to face new and stronger enemies until they reach the final boss. In that fashion, the majority of the characters are analyzed to the fullest, through their interactions. This tactic finds its apogee in Won-ho, who has to meet the criminals and then act as one of them, in his interactions with Jin Ha-rim and Park Seon-chang, resectively. Furthermore, as time passes, Won-ho emerges as the truly dramatic figure in the film, which adds another layer to his persona. Evidently, the character also benefits the most by Cho Jin-woong’s acting, who is exceptional in the role.

The second most intriguing character is Rock, whose turnaround from a drug trafficeker to someone who betrays his organization is impressive, in a character that manages to retain his cool and distance despite all the violence that takes place around him and the danger he is in. Ryu Jun-yeol is also quite convincing in the part.

This prowess in character creation also applies to the villains, with Kim Joo-hyuk portraying the archetype of the paranoid kingpin with gusto, while Park Hae-joon as Park Seon-chang is quite convincing as a man who sees his power slipping from his hands due to someone lower in the organization ranks.

The character development also benefits the most by Yang Jin-mo’s editing, whose quick cuts keep the change of settings, characters, and personas quite agonizing, while retaining a very fitting pace that benefits the entertainment aspect of the movie to the fullest. Kim Tae-kyung’s cinematography is equally accomplished, with his framing, in both interiors (where Lee Ha-jun’s production design also thrives) and exteriors, being occasionally exceptional, with the images in the finale being probably the most impressive in the film. The images could be described as “over polished” occasionally, but again, this fits the general aesthetics of the production. The various action scenes, which include a very intriguing woman-on-woman fight, and particularly the explosions benefit the most from the aforementioned aspects.

Some elements of nonsensicality (illogicality if you prefer) do exist, as is the case with most HK action films, but I felt that this is a fault that can easily be overlooked, particularly since it has allowed Lee Hae-young to omit the omnipresent (in Korean cinema) melodramatic elements.

“Believer” is an impressive and quite entertaining action thriller, which highlights the fact that Johnnie To’s productions can be very easily adapted to the current style of Korean cinema. I am sure the success of this one will open the way for more, and personally, I cannot wait.