At the height of the studio’s success in the 1970s, the Shaw Brothers studio was churning out dozens of martial arts and kung-fu flicks that were completely out-of-fashion by the time the 1980s hit. Their beloved period-set swordplay and brotherhood movies were no longer in vogue, and instead offered up a few final stabs at the style while moving on to bigger and more elaborate fare with a series of grisly horror films and more fantastic martial arts pieces. Among those fantasy-laden kung-fu efforts was this stylish and ornate piece from director Lu Chin Ku originally titled ‘Wu lin sheng huo jin’ but known mostly as ‘Holy Flame of the Martial World.’ 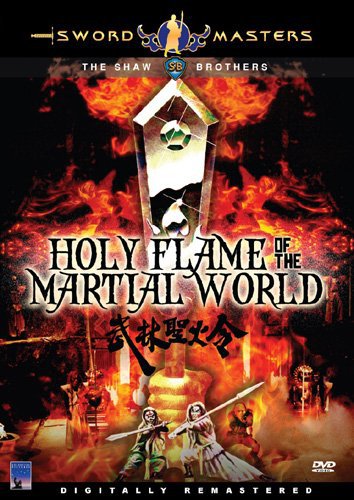 Finally having grown up, young Yin Tien-chu (Siu Chin/Max Mok, from the “Once Upon a Time in China” series) sets out to help the innocent and downtrodden, unaware of his destiny sent down years earlier from the death of his parents. Settling out into the world, he comes across Tu Chaun-erh (Yung Jing-Jing, from “Buddha’s Palm”) a young woman who’s under attack by a clan of warriors looking for a relic he’s also been sent in search of, to help in his quest to avenge his parents’ murder. Managing to retrieve the object, their paths intersect once again with the vicious Omei Sect Chief Tsing Yin (Liu Hsueh-Hua/Leanne Lau, from “Hell Has No Boundary”) who’s trying to utilize the sword’s powers to rule the martial arts world.

“Holy Flame” is an exceptionally enjoyable effort. Like the vast amount of films in the Shaw Brothers arsenal, this one generates plenty of impressive acrobatics in their martial arts which is in full-on fantasy-driven spectacle. This is literally dripping in the more overt style of fantasy-driven fighting styles that offers plenty of thrilling scenarios involving fighters who can disappear into thin air, manipulate swords or other objects with their mind or simply fly around the room simply through sheer will. These elements create a stellar series of high-energy action set pieces. This ranges from the absolutely frantic encounter in the underground temple where they must progress past booby-traps and special techniques to get through or the full-on battle with the revived spirits and a special mummy that’s nearly impenetrable by any conventional weaponry. Even the finale, which is draped in fighting from the two sides, utilizing all manners of special laser-powered weaponry from their spells or the weaponry they wield, gives this a thrilling spectacle-laden showdown with the set being blown to pieces as they go about their lengthy fight that’s mixed with enough traditional fighting and swordplay to feel satisfactory. 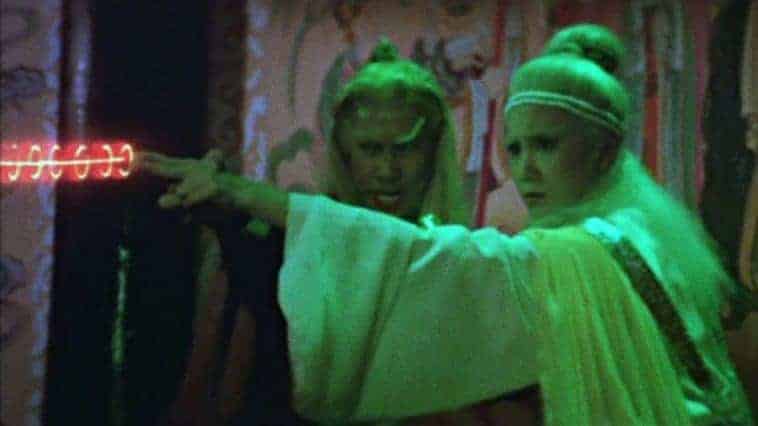 Beyond the special effects prowess, ‘Holy Flame’ even offers plenty of traditional martial arts techniques and swordplay by stunt coordinators Phillip Kwok and Yuen Tak. Not nearly as dominant as the special fantasy work, this one still maintains enough hand-to-hand and other forms of combat to really make an enjoyable impression with the early fighting scene showing their parents getting murdered, which sets the whole affair into play, getting this off to a nice start. With plenty of capable performers throughout here, efforts like the swordplay demonstration with the flock of female fighters or the random bandit thrown into the film to simply get another fight with the girls makes for a thrilling setup, alongside the number of confrontations with the variety of action actors getting a chance to readily shine in the various brawls. While the influx of the fantastical does creep into even the most basic of swordplay and hand-to-hand duels, it manages to contain enough nominal wire-assisted movements to allow this one to feature some fantastic action for fans of this particular style.

The acting works rather nicely in here as well. Siu Chung Mok plays hero Yin Tien-chou as an impressive individual. Self-righteous and wholly innocent of the ways of the world, he creates a wholesome hero to follow along his quest, and while his martial arts skills aren’t as impressive as some other heroes from the Shaw cannon, he can still hold his own and demonstrates some skill-set as an actor that makes him a sympathetic figure. Phillip Kwok is fun as his master You-ming Elder. Priding in his pupil’s work, he gives off the honorable teacher and martial arts master quite nicely, demonstrating fairness in his training and virtue in his tactics that complies with his stellar martial arts abilities.

Their opponents, Omei Sect Chief Tsing Yin is played by the young Liu Hsueh-Hua who, despite being given a grey-haired wig, was actually in her twenties. That enables for plenty of martial arts prowess and technical display to be exhibited throughout, which is used to evil intentions with her goal of getting her hands on the two different swords. She becomes a little hamfisted with a one-note performance but she holds her own in the fights and looks suitably evil in her demonstrations against her classmates. The other noteworthy roles, Yung Jing-Jing as love-interest Tu Chuan-erh and Yeung Ching-Ching as his eventual sister Yin Tan-Feng are both great in their roles. Yung offers some sweet and funny moments with her naive exuberance matching his youthful intrigue while Yeung gets a full arc knowing her true history and the double-turn is quite effective. Likewise, no one else really disappoints or does anything to stand out. 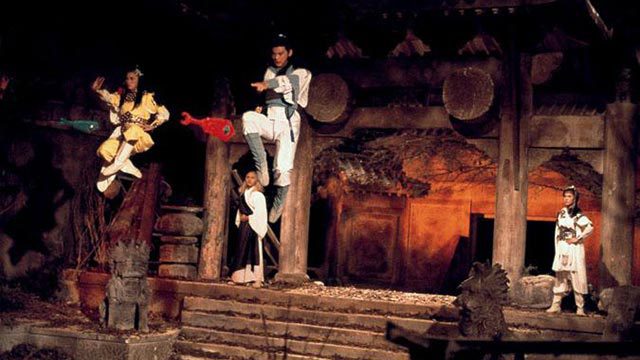 There’s not much to dislike here, which all pretty much ranges from one particular aspect of the film. There’s way too much going on to really make sense of the plot considering this is an important aspect of the story line. Given the entire premise is built around the revenge plotline from the death of the parents, the inclusion of the need for the quest to the different swords merely takes up time that doesn’t need to be spent. It incorporates the most detrimental element about the film from that issue, which is the inclusion of too many characters for what should be that simple revenge storyline, as keeping track of the different fighters, their clans and their association to each other is entirely confusing to matter, in a film as action-packed as this one is. Trying to keep track of the girls and their associations is quite complex due to the fact that it’s all women and the allegiances are all in quite obvious flux. This is a major problem with so many characters and motivations, that it gets quite complex and overbloated which is not a likable feature with something like this. There’s also the fact that this one has too much goofy special effects which obviously showcase a lower budget, but overall it’s not as detrimental as it should be.

One of the finest and most enjoyable entries the studios’ cannon, ‘Holy Flame’ offers up plenty of exciting action and special effects-laden fantasy thrills even with a few minor issues. Definitely seek this one out if you’re into this particular style of fantastical martial arts fare or are fans of the performers in particular while those that prefer their more traditional efforts should heed caution with this one.