“…And the spirit of God acted upon the water.” (from the Book of Genesis)

Water is at the core of many belief systems, especially considering most of their rituals and traditions are based on the element. With springs and wells being the goal of many pilgrimages, water is strongly connected to faith, spirituality and a sense of originality. For author Anna Bond (as quoted by Phylameana Iila Desy) water is “the common denominator” uniting us all, even beyond the borders of belief and faith.

From the tradition of christening a child to a ritual ablution, water has always been linked with time and transition. Consequently, oceans and lakes, images of the sea imply a connection with the transcendent, the metaphysical. Naturally, water is believed to have a healing power, apart from the act of cleaning for which we use it for every day. Many cultures have a long traditions of water healers, a task which has been handed over from generation to generation, and one which has become essential for many communities.

However, the notion of the water healer feels outdated. With many people abandoning any thought of the metaphysical in their lives, water remains nothing but a resource to be used (or exploited) within their daily lives. For Georgian director Zaza Khalvashi the concept plays a central role in his film “Namme” as it constitutes a transition between tradition and modernity, he mentions in an interview during the Las Palmas Film Festival.

At the same time, Georgian cinema experiences a similar transition, it seems. Apart from the government funding the domestic film industry, so far the reception “Namme” has seen, proves audiences are eager to see a more “poetic cinema” from his country. According to Khalvaski Georgian cinema has always been “modern and progressive”, open-minded towards new ideas which highlighted the changing landscape of the world.

Namme (Mariska Diasamidze) lives with her father Ali (Aleko Abashidze) in a remote Georgian village in the midst of the countryside. Ali has been a water healer for many years, hoping his sons and his daughter will eventually take over this significant task within the village community.

However, his three sons have developed in different directions, seeking a certain distance from the beliefs of their father. While one has become a mullah (Roman Bolkvadze), the other became a priest (Ednar Bolkvadze) observing the building of a church in town. The final one (Roin Surmanidze) is the only teacher in town, dedicated to philosophy and his profession.

Since Namme is the only one willing to take over from her father and become a healer, Ali prepares her for this responsibility. But the experience of the outside world, her discovery of the kind of life she is about to commit herself to, leads her into a deep crisis. 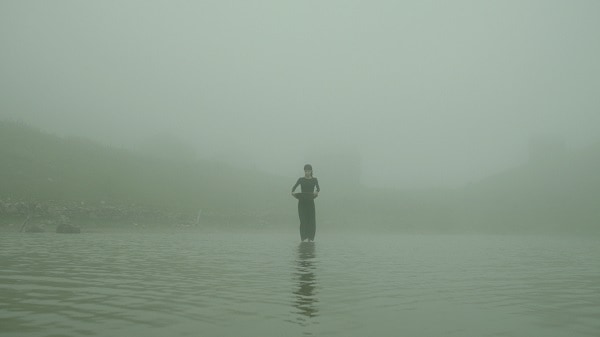 In an interview about the film, Khalvashi expressed how “Namme” is a film not focused on characters too much, but rather showing them within the environment they live in. Shot in the highlands of Adjara, in Georgia’s south-west, the setting is quite beautiful. From the very first frame of “Namme” – a rock within a mountain river – the viewer can witness this unique landscape, as well as the core themes of change and time. However, as the water surrounding the stone slowly turns milky white, the foundation is soiled, transformed, but since the shot remains static for a few more moments, the image remains ambivalent. There is simply no way of knowing if this change is positive or not.

Interestingly, despite water being an agent of change, most of the characters seem to be immune to any kind of change. Highlighted by the long, static shots of Giorgi Shelidze’s camera, the environment seems at a standstill sometimes, as if the viewer is thrown back to an unknown, but long gone era. The omnipresent sound of water betrays the picture in a way suggesting the passing of time, while also an inevitable force of change.

Zaza Khalvashi’s film is a representative of “slow cinema”. Considering the director’s emphasis on cinema striving for poetry, not only does “Namme” manage to create astoundingly beautiful images, but also takes its time. The result is strongly reminiscent of the work of filmmakers ranging from Andrei Tarkovsky, Béla Tarr or Kim Ki-duk for its symbolic richness and patience. Besides stressing beauty and change, “Namme” achieves an almost meditative quality, fitting to its theme of spirituality.

From Ali or Namme to her three brothers, there is also a deep chasm between the world and the people. In this, case all three sons have created distance from the faith of their father, found substitutes in other beliefs or sought a permanent refuge from the restrictions of tradition and inheritance. Consequently, in a world in which passing down the task of one healer to the next in line comes as natural as the flow of water, denying this passing must have severe consequences. Hence, the discoloring of the water from the beginning.

With Namme being the only person left to take over the role as healer, to follow in her father’s footsteps and fit within the community, defines a more drastic change than she anticipated. Witnessing the change around her, for example the increasing influence of industry to the village, as well as within herself when she finds first love, following the same rituals obviously places her out of sync with herself. Mariska Diasamidze delivers a wonderful performance as a woman at odds with tradition and forced to regain some sense of balance.

“Namme” is a film of beauty, a meditation on time and change as natural forces within ourselves and our surroundings. With fantastic cinematography, this is surely a movie much in line with its director’s demand for a more “poetic cinema”. Whatever one’s stance might be on themes such as spirituality, for those still believing in the art of film, the beauty of the frame, there is simply no getting around this film.

2) Zaza Khalvashi: “Namme is a film about silence” (2018)
http://www.lpafilmfestival.com/zaza-khalvashi-namme-es-una-pelicula-sobre-el-silencio/?lang=en, last accessed on: 06/21/2018

Documentary Review: Kabul, City in the Wind (2019) by Aboozar Amini