I have to admit, I consider Masaaki Yuasa one of the greatest anime directors of our time, one of the few who directs, continuously, titles that are addressed to adults and not children or teenagers, who seem to be the industry’s main target. Starting with “Mind Game” and “Kemonozume”, and continuing with “Ping Pong” and “Space Dandy,” I have cherished all of his works I have seen, and as it turns out, “Night Is Short, Walk on Girl” was no exception.

The Night is Short, Walk On Girl is screening at Nippon Connection

The story revolves around two people, the Girl With Black Hair and Senpai. The latter is in love with the former, and he has been trying to ask her out for some time, with his place and time of choice being a wedding they both attend, which is also, where the story starts. The Girl, however, whose resolution is to always move forward, embarks on a truly crazy night in an imaginary Kyoto, where she exemplifies her uncanny capacity to hold her liquor. In her trip, she meets the inventor of a replica of a famous drink, an older, sleazy collector of erotic woodcut prints, a group of elderly drunkards, the god of second-hand books, and a guerilla theatre troupe whose purpose is to mock the School Festival Executive Head and disrupt the festival with their extreme opera. Senpai tries to find her, but continuously gets in trouble, while he seems to miss her by a hair the whole time. His meeting with the School Festival Executive Head and the presence of his close friend, Don Undeprants (who has vowed not to change his underwear until he finds a girl he has been smitten with, since a chance encounter, a year before) puts the whole case into yet another level. 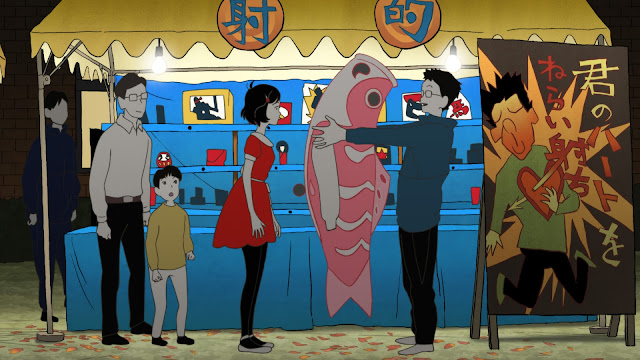 If I had to use one word to describe the film, that would be relentless. Starting with the witty dialogues, continuing with the constantly moving in extreme angles animation of the characters and the background, and ending with the absurd collage of extreme episodes that form the story, the anime stops at nowhere and not for even a minute.

Inside this chaotic setting, Yuusa, and the screenwriter, Makoto Ueda (who based the film on the homonymoys novel by Tomihiko Morimi) manage to entail much humor, but also a number of social comments. The elderly and how they deal with the world, the perception of time, books, art, friendship, and companionship, love and romance, and their difficulties are all examined here through the filter of drunkenness, and in an extravaganza of colors that makes the anime deliriously entertaining.

Furthermore, after a fashion, some musical elements come to the fore, with the film functioning as such for a large part of its duration, where Michiru Oshima’s Disney-like music is used in the same extremity as the animation and the coloring. 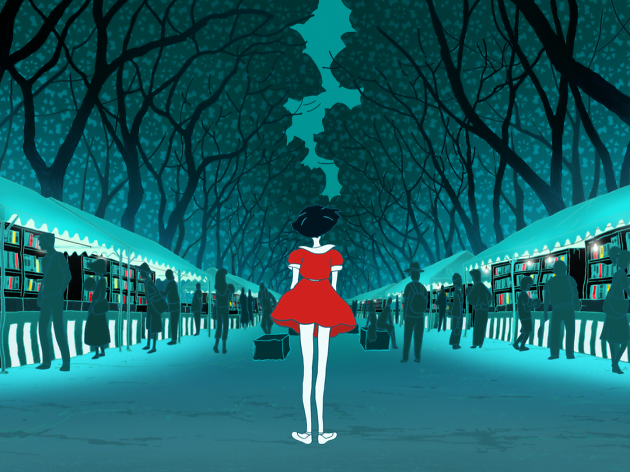 Regarding the animation, Yuasa has chosen a style that moves somewhere between the European and the Japanese, presenting an amalgam that seems to fit the general aesthetics to perfection.

Evidently, the general style, both in terms of pace, dialogue and visuals is somewhat difficult to follow, and demands the viewer’s full attention in order to appreciate it fully, not to mention a knack of absorbing the chaos. However, if one were to surpass this “limitation”, he would come across a really great title, which continues Yuasa’s nonconformist path, in the best way.