For a country with such a rich visual history in their films, it would seem that another effort would’ve come along by now that tackled the so-called ‘Avant-Garde Vampire Film’ movement. Still, such is the praise being labeled on Naoki Yoshimoto’s celebrated hour-long experimental piece Kyuketsu, also known as ‘Sanguivorous’ and destined to have originally been performed with live musical accompaniment. 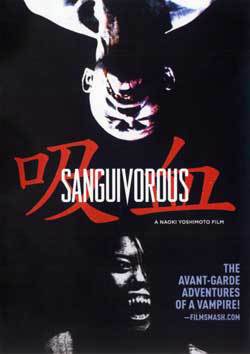 Trying to move her relationship along, a young woman (Ayumi Kakizawa) finds herself struggling with strange nightmares and bizarre dreams about vampires. Her boyfriend (Masaya Adachi) finds a link involving her family discovering a coffin of a Romanian count hundreds of years ago and becoming a part of a family curse turning her into a vampire. As she delves deeper into the series of dreams and nightmares about a strange vampire tormenting her, she comes to realize the danger it poses to her and her boyfriend.

For the most part, there isn’t much to say about this one. This is basically a series of seemingly unrelated images accompanied by strange photographic effects added to the finished product. The vast majority of footage director Yoshimoto, who also served as numerous roles, including cinematographer, on the project, captured doesn’t make for all that appealing genre fare, being that it’s generally shadowy hallucinogenic shock cuts or bizarre soundless montages that don’t follow any narrative cohesion. None of this is in the slightest bit scary or suspenseful, and seeing people turn into these disturbed figures aren’t given any formal context into why it’s happening, which drains the illusion further. Seeing as how this is generally told in dialog-free sequences featuring the avant-garde manner of screen distortions and modifications, the film loses any chance at telling its story cohesively. All it does is offer the excruciatingly bizarre scenes that focus on filmmaking tricks rather than capturing a form of everyday life that could’ve offered a semblance of normalcy to the whole effort.

That said, in terms of displaying those filmmaking tricks, this succeeds in leaps and bounds. The constant use of shadowy black-and-white for her hallucinations does effectively create some haunting visuals, and the overwhelmingly creative means of generating the transfers here is nice to watch. Seeing people materialize out of total shadows, overlaying figures transposed over each other and frayed images dissolving into the next sequence are merely glimpses of the technical trickery accomplished by Yoshimoto, as the experimental procedures are whipped out pretty consistently by the varying tactics being employed. One of the best examples of this is a stellar sequence featuring her tormenting her trapped boyfriend who’s bound to a chair screaming for help, which is one of the few moments of true traditional horror displayed here. Beyond that, only the great performance of the vampire lead, Ko Muroboshi, is worthy of mention as his spastic, gyrating figure tormenting her which is hard to take your eyes off of while watching. Otherwise, this will mostly be looked at as barely worthwhile at all.

As a form of visualistic expression, there’s a lot to really like here which is especially important when realizing that this was intended to be accompanied by a live musical performance and not as a stand-alone feature. Still, when looking at this as a feature film, it is barely worthwhile and doesn’t have much here leaving it only for the most adventurous and curious among us to dive into.