Like in his previous movies, Chinese independent director Miaoyan Zhang signs script, direction, cinematography and editing of this fourth feature, “Silent Mist”. A China-France collaboration, the work has benefited of the Busan Festival’s Asian Cinema Fund and was consequently launched at the 2017 edition of the same Festival. Like all Zhang’s movies, “Silent Mist” is firmly grounded in Chinese social realm and channels some real-life unsolved cases of rape to tackle other aspects of greed and lust.

With efficacy and realism, the director introduces the location of his movie during the opening credits with an impressive sequence in which we are chaperoned along a Chinese canal town. A very long single take – a constant feature of the movie –slowly reveals the water-side houses of a town that expands on a linear vector and looks disturbingly endless. The camera then follows an old folk performer walking on the promenade at twilight, the sound of his steps is deadened by the moist fog raising from the water. We see him from behind and the camera seamlessly moves from him to a woman and – one after the other – gently touches the three women that will inhabit the story about to unravel. But an invisible danger is lurking in those dark, silent alleys, a rapist is waiting for a pray and his first victim is a young schoolgirl. Very soon the whole town seems to be informed of the rape and starts gossiping about the girl with no sign of compassion. In the meantime, a greedy and smug businessman does his round, tormenting house and shop owners with his offers and requests to buy their properties.

The rapist and the businessman are both inwardly obsessed with personal gain, they are gluttons for money, pleasure and ultimately, power, and their roles of violators will eventually overlap and symbolically merge. In this doomed village that seems impossible to escape, the story elliptically ends back where it has started, brushing past – one by one – the violated women and their despair, resignation and insanity. In a final gesture of hope, the young schoolgirl frees a small fish in the river. 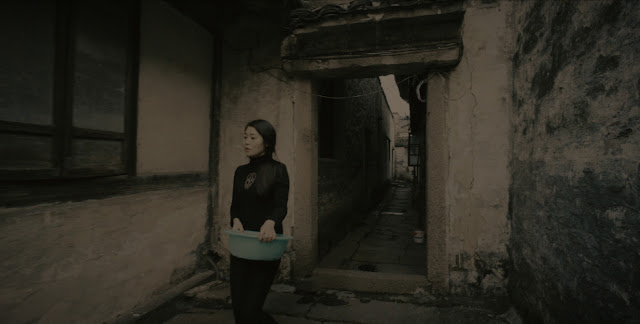 The sensory experience that Silent Mist provides is unique. Every single frame of this movie is a stunningly composed photograph, extremely elegant in composition and colours, the latter unsaturated to the point of a semi-black-and-white effect with just touches of colour, mostly red paper lamps at night and a blinding yellow in one poignant scene. Mostly using long takes, the director follows the characters, frames dramatic wide-angle crossroads and plays with time and space creating suspense out of long, excruciating pauses on empty alleys. Like the photography, the sound design here is crucial too. There are barely 50 spoken words in the whole movie and only some hints of music, the rest is a collage of background noises, distant chatter, footsteps, dog barks, all muffled and quietened, as if emerging from the thick fog that envelopes the town.

Director Zhang has named three stages of the narration after the places where the violations are perpetrated, Alley, Boat and House and his claustrophobic town of connivance is, in fact, a numbing sequence of alleys, boats and houses and again alleys, boats and houses (it oddly reminded me of the dream-like strolls along endless corridors, halls, rooms and salons in “Last Year in Marienabad”). The very recurrent sight of hanging meat and fish – something you see everywhere in Chinese towns – is here emphasized and extended to form a surreal pattern of sprawled corpses, a taunting cemetery of victims. It is an incredibly strong visual statement.

While Zhang uses extremely subtle tones for the formal aspect, he doesn’t hold back when it’s time to point the finger at the rapist and the businessman. They are grotesque – almost caricatures – in their look and body posture. Like characters of a folktale they are hunched like rats or have irritating grins and this contrast with the subtlety of the visual is sometimes slightly overplayed. However, they also manage to deliver a couple of moments of odd, dark humor. The businessman evokes the insidious side of progress, the consequences of the materialistic culture, brought out by the abrupt social changes China is going through at great speed. It’s also another face of the age-old culture of sexual dominance.

Miaoyan Zhang has orchestrated a dreamy parable of excessive desire and its high casualties, following a very clear vision of the form. “Silent Mist” is a strong statement encased in an extremely sophisticated package and will easily gain consensus within festival-goers.

Interview with Mohammad-Ali Talebi: You can still see works of quality coming out, but I feel these are the last attempts of an era...

Interview with Takashi Makino: My film looks like something very noisy and abstract, but actually, everything in it comes from our own world