Just when you think 2017 has been a good year for Taiwanese cinema, here comes a movie that upgrades “good” to “excellent”. “The Great Buddha +” is the debut feature film of Taiwanese director Huang Hsin-yao and it’s an extended version (hence the “+”) of his 2014 short movie “The Great Buddha”. Previously a documentary director focused on social and environmental issues, Huang has been helped in his new enterprise by fellow director Chung Mong-hong, in the role of producer and DOP. “The Great Buddha +” scooped several awards at the Taipei Film Festival and later the prestigious New Director Award at the Golden Horse Awards, along with Best Original Film Score, Best Cinematography and Best Adapted Screenplay.

The Great Buddha + is screening at Art Film Fest Kosice

Like in his documentaries, the storytelling is aided by the director’s own voice-over commentary, punctuating the movie here and there with dark jokes, sarcasm, social comments or deadpan explanations.

The film opens with a striking scene of a funeral parade that looks straight out of an Italian neorealism film of the 60’s. A rickety, lousy band is playing (or I should say torturing) the Auld Lang Syne ballad. Pickle (documentary director Cres Chuang) is the drum but this is only a side-line job he does in order to earn a bit more money to spend on his elderly mum’s care. In reality he has a night job as a watchman at a factory and foundry where the boss Kevin Huang (Leon Dai) produces big bronze statues of Buddha, making him an important member of the community. In reality, behind the respectable veneer Kevin is an unstoppable predator and womanizer, surrounded and protected by a conniving circle of corrupted members of the city administration. 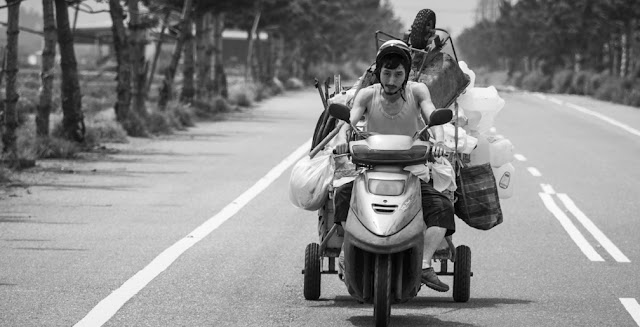 Nothing really happens in the control room where Pickle spends all his nights and the only pastime is provided by his friend Belly Button (Bamboo Chen), a recyclable collector during the day who visits regularly to share with Pickle his lonely nights. They usually watch an old television while eating expired lunch boxes – sometimes still frozen – that Belly Button collects in his rounds and if it’s a lucky day, they can even have a pick at few “very used” porn magazines. One night that the TV is out of order and the boredom is unbearable, Belly Button comes out with the brilliant idea of checking the dash-cam footage of the boss’ Mercedes. Reluctant Pickle is soon sucked in this voyeuristic video game. Watching streets and tunnels unravel feels a bit like treasure hunting as the footage is dotted with saucy bits and pieces of dialogues between the boss and his sexual prays for the entertainment of the two bored friends. But one of the video clips reveals something that will make the duo regret to have been so noisy. 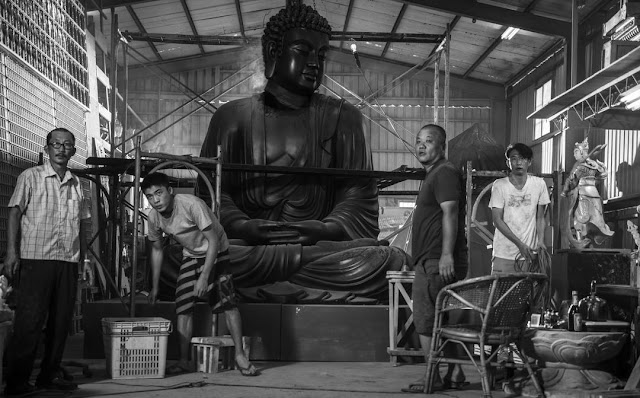 Strictly speaking, “The Great Buddha +” can be placed in the Thriller box (Find-Footage sub-box) but there are many more layers and keys to read it as the movie flies above the genres and lightly mixes black comedy, noir, social commentary and exposé of society corruption. But its peeping game is also a sour metaphor of the airtight bubbles and cliques that constitute our life and in specific of the impermeability of social classes.

In a reverse fashion to the traditional find-footage movie, “The Great Buddha +” is shot in a very crisp, contrasted black and white while the dash-cam videos are in bright and vivid colours. Like a portal on another dimension, the computer screen opens up a psychedelic world that our 2 losers, stuck at the bottom of society, can only imagine and that feels light-years away from them. In a surreal P.O.V. mode they peruse a city that is not for them, with colours they never see and women they’ll never have. It’s a world of “us” and “them” on the other side of the glass, but also the of “me” and “you” as in one of the final scenes of the movie Pickle sadly reflects, sitting in Belly Button’s bed-pod and surrounded by the soft toys won by his friend at the Claw Machine. As the director’s voice comments: “Pickle realised then, how little he really knew about Belly Button (and that) we’ll never be able to explore the universe of others’ hearts”, 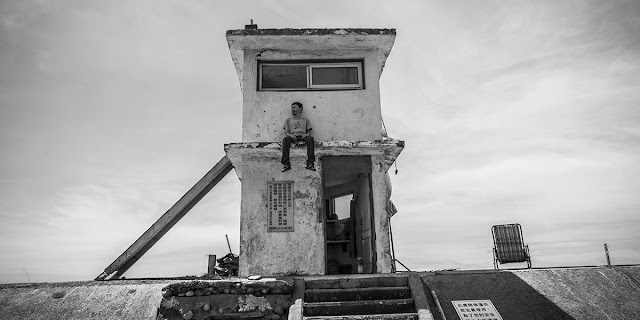 The narration of this underclass world is populated by an array of eccentric and whimsical characters, beautifully sketched with just few lyrical details. Sugar Apple (Shao-Huai Chang) is a decent and enigmatic loner, Peanut (Na Dow, seen in Godspeed) is the lazy, grumpy guy working at the convenience store, Pickle’s spectacle-seller uncle is a compulsive trickster. Some truly memorable scenes involve a semi-nude pool party and a conversation between a congressman and a religious woman, heavy with innuendos and cheeky mannerism. Moreover, the karmic finale will leave you with a good deal to ponder over.

Under the pseudonym of Nagao Nakashima as director of photography there is Mong-Hong Chung, director of that other successful Taiwanese product, “Godspeed”. Impressed by the short “The Great Buddha”, back in 2014, he offered to produce and shoot this extended version. His elegant and artfully framed moving images play a big part in the charm of this movie, giving it gravitas and a very distinctive flavor.

An art-house movie with a humorous dark heart and a sarcastic observation of social insurmountable divide, “The Great Buddha +” is a very high starting point for first-time feature director Huang that deserves wide visibility and recognition.

A Taiwan movie from Orchid Island screens on 20th Oct. in Berlin

Interview with Huang Hui-chen: No matter how hard it is, making this film is still better than living our whole lives as two strangers