One day during class, Hitomi’s homeroom teacher ends up being taken away by the police and it is soon revealed that he was involved in a sexual relationship with one of the students. This causes a lot of joking around amongst the students and Hitomi’s friends. However, a video ends up being leaked, featuring a student that looks similar to Hitomi. Soon the rumors start to spread throughout the neighboring schools.

The Hungry Lion is screening at Nippon Connection

At first Hitomi’s adamant denial that she is the one in the video is enough to convince those closest to her. Specifically, her boyfriend, mother, sister and close friends all take her side. However, as the rumor begins to escalate doubt begins to form in those around her, as the constant pressure and jokes about her begin to push people away who would prefer not to be involved. Tragically, this rumor also attracts those, under the guise of trying to help her, to further exploit her situation. All this becomes too overwhelming for Hitomi and she ends up making a drastic choice. Afterwards, the film switches to the media covering the fallout. It becomes a hot topic and the news is quick to swarm family and friends and twist the story to their own interest. 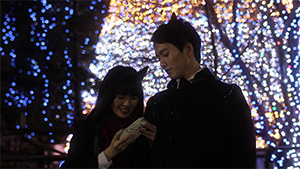 The strength of the film lies mostly on the subject and scripting. The issue of misuse and disconnection that media can bring when being used as a tool to vilify someone, particularly when evidence presents itself that the source has no validation, is a problem that is not often discussed or explained to those who rely heavily on social media and the internet. Hitomi’s story in the film is not unique, which was a good creative choice as it allows for a bigger issue to be presented on a more relatable level. Even if a person has not been in the situation where they were wrongfully accused and publicly shamed, the viewer should be able to understand the fear of having social media turn on someone, using false claims to ruin their social standing. This concept is complemented by a good script that is well paced and does not indulge in sensationalism, instead choosing to build up the character of Hitomi so we can better understand the dire consequences of what has happened to her.

Visually the film is somewhat lacking, with most scenes being single framed with no camera movement. A big deterrent was the cut between scenes, as there is a black screen between each scene that lingers long enough to become noticeable. Unfortunately, none of the scenes transitions that well into another. Thankfully,  each shot is well set up and seems to be thought out, which saves the overall visuals of the film. The single frame shots also do create a sense of intimacy with the characters which help strengthen the narrative.  Urara Matsubayashi does a great job as Hitomi, the role almost seems like it was made with the actor in mind. Although, the film may have been improved if Matsubayashi was allowed to show a wider range of emotions. In the face of awful circumstances, her demeanor seems a bit too calm. The rest of the cast does an adequate job, no one drags down the production.

What holds “The Hungry Lion” back has to be the way it is structured. The first hour (roughly), is focused on Hitomi’s story, while the rest of the film chooses to focus on how the news handled her circumstances. Hitomi’s story is fascinating and well told, and the transition into trying to create a larger social commentary seems forced. With the transition itself being particularly jarring, as on top of losing the main protagonist, the visual style, and pace changes. Resulting in a closing that feels like a separate film. It is also unnecessary as the message is well conveyed through Hitomi’s plight and the fallout could have just easily have been assumed without being shown. Even in choosing to show the news and the community reaction to Hitomi’s tragic tale, those segments could have been integrated into Hitomi’s story to avoid such a jarring change of pace. 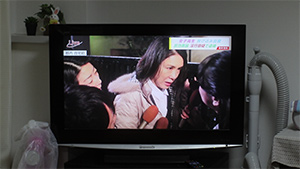 “The Hungry Lion” suffers from a misguided closing act, but everything leading up to that point is engaging. It is not surprising to find out after seeing the film that I learned Ogata’s previous film “Sunk in the Womb” was championed by a charitable organization fighting against child abuse because this film is really well written and confident in the message it is trying to get across. It should make for positive talking points about a modern-day problem that is not addressed enough in the media, as people often get caught up in the sensational nature of a rumor, choosing the easy path of indulging and criminalizing instead of trying to take a more humane approach to the victim of the accusations. The way “The Hungry Lion” tackles the subject matter makes it a noteworthy and engaging experience that most viewers will be able to understand and relate to.

Film Review: Sunk Into the Womb (2013) by Takaomi Ogata

Interview with Takaomi Ogata: “Currently, though, people are calling for an end to this myth of motherhood. And I quite agree with that.”