There is a number of movies produced to promote a specific ideology or back the politic party. Leni Riefenstahl received solid support from Hitler and she repaid with “The Triumph of the Will”. You can also find that many antagonists from cold war time Hollywood movies are actually communists.  So it is natural to think North Korea, the notoriously secretive country of the world, highly values movies for the regime and the leaders.

KIM Jong-il, the second supreme leader of North Korea was an outspoken fan of movies since he joined Propaganda and Agitation Department (Seon-jeon-seon-dong-bu) in 1966. He had collected more than 15,000 DVD at his personal library and even abducted South Korean movie director and actress in 1968. And his son KIM Jong-un who studied abroad is also known as a big fan of movies.

In this screening, three episodes are based in a big city which looks like Pyongyang, the capital city of North Korea. Unlike the general expectation, roads are busy with different types of cars and skyscrapers line up along the road. Adding to this fantasised city image, every corner of the street is covered with flowers and grass, and the drawing style follows the styles of Dutch school’s still life. People wear traditional attires or modern outfits (Westernised), and surprisingly some of the females in town wear high heels and miniskirts as well. Considering this animation series was made in 2006, North Korean culture is already mimicking or aiming to be like a city from the developed country. The main story line is as this: A kid hesitates to jaywalk, and he/she cannot be waited until the green light or not following the policewoman’s hand signal. Suddenly a truck hurtles, the scene changes with the face of a policewoman and a kid, and the dissolve with calm classical music. A kid confesses his misbehaviour and later, it shows the right way to cross the road.

The two other stories have some differences from the urban stories. One noticeable point is the main characters fashion styles also differ from urban residences’ one, mainly jackets and boots. The location seems quite far distanced from Pyongyang and many construction trucks pass the road; unlike the city traffic, there is neither sedans nor traffic light. The misbehaviour is mostly related to the trucks, such as hooking a ride or harming the truck whilst playing. In other words, children in North Korea learn that any behaviours that impede construction is critical misbehaviour and will be punished in the end, like loss of their possession (In the movie, a kid breaks his cool-looking sledge) or facing a life-threatening situation. 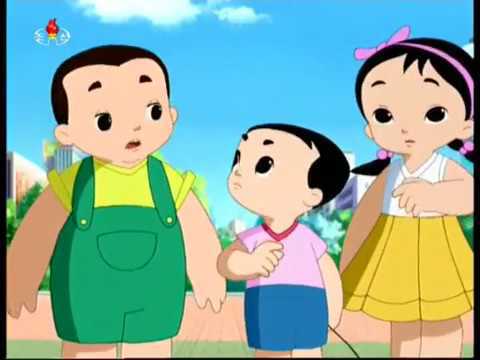 If you keep eyes on details, there are some points to consider; it is still a so-called Juche communist society. Kids play with a ball near the theatre and an actor who is dressed up as a bourgeois, and a small kid – looks like four or five years old – fiercely springs at him. And kids are going to go the amusement park to play with machine guns after reading ‘Socialism Ethics’ textbook. Unlike western animation for kids,  the role of of parents is missing in the stories; uncle or grandparent are coming – however, the identity of parenting in Juche ideology is made up of father Kim, and the generous state as a mother.

It is hard to catch up with the hermit for decades at once. Under KIM Jong-un, the third supreme leader of the country, North Korea experiences the most radical changes since its foundation. However, the unchanging core values of the state, which are injected from childhood, can be seen in the running time of the film. This animation will give some brief idea of the fundamental of North Korean which has been veiled for long.