Probably the most interesting prospect of Filipino cinema, Mikhail Red, once more, presents his social comments through a genre packaging, in a crime thriller taking place in Manila, with the war on drugs of President Duterte providing the base.

In this setting, we meet the film’s main hero, Toto, an orphan who sleeps on the streets and is trying to find a man that will allow his brother, Kiko, to be released from prison, or at least to find money to make his bail. Toto has a girlfriend, but her brother, Dugo, occasionally gives him a hard time. When tragedy hits him even harder, Toto does not find any reason not to join a duo of killers for hire working for a man named Sarge, Irma and Raul, with the former eventually taking him to live in her house.

Mikhail Red paints Manila with the darkest colors, as a city where crime, gangs, addicts, mercenaries and corruption is everywhere to be found, with death waiting in every corner, since the only thing one has to do in order for his crime to be left unpunished is to leave a sign on his victim naming him/her as a drug trafficker. In this hellish setting, it is of no surprise that a teenager joins the killers for hire, particularly since Irma provides the triptych of a mother, a home, and even a lover, at least in the mind of a teenager. Through his story and the general setting, Red makes a rather pointy comment on the dog-eat-dog situation Duterte has created, with the footage in the film’s finale stressing this tactic even more. 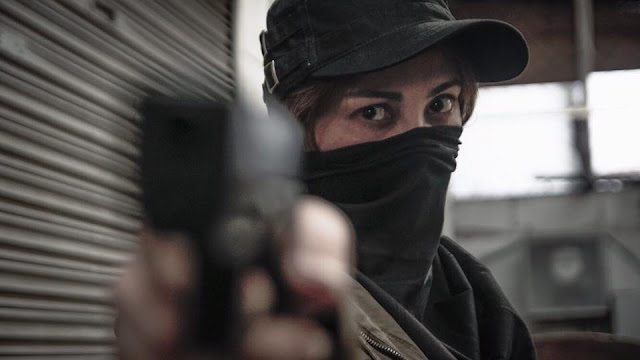 The action of “Neomanila” follows the same realistic paths of its general aesthetics, with the violence depicted with no pulled punches, in a fashion that is the opposite of glorified, as the killings involve people sleeping and mothers with their babies. Add to all that some humor, elements of film noir, sex, and a finale that turns everything around, and you have the backbone of the film. Regarding the last aspect, though, I felt that Red took it a step too far, with the plot twist appearing disconnected, and actually faulting the general atmosphere of the film.

Mycko David’s cinematography is one of the film’s greatest assets, with him portraying Manila with artistry and realism, in a number of different locations, that include dark narrow streets, the inside of trains, sex hotels filled with neon lights, markets and many other places. At the same time, the rundown setting most of the story takes place in is contrasted with the skyscrapers of Makati, who look particularly impressive during the night, in a world that seems so close but actually too far for the protagonists of the film. Jeffrey Loreno and Mikhail Red’s editing provide a nice pace for the movie, with the switching of the scenes that move fast and the ones that linger providing the style Red wanted to give each time, sometimes that of the drama and sometimes that of the action thriller.

Timothy Castillo gives a nice enough performance as Toto, highlighting his character’s hopelessness and his difficulty to succumb completely into violence, as his environment demands. The scenes where he tries to appear tough and the ones where he is trying to hide his lust for Irma are the highlights of his performance. Eula Valdez is the personification of the femme fatale in the movie, in a combination that combines the mother with the angel of death. Her performance benefits the most by her impressive physique, in a kind of a Philippino edition of Jessica Lange.

“Neomanila” is a great film that combines entertainment with social comment, although its impact is somewhat reduced by the faulty finale.