“The Bold, the Corrupt, and The Beautiful” is about a female family, who plays middle-man in a series of political corruption and bribes. Combining a love/hate relationship among the family members with complicated money trade, this film was the most ambitious work in Taiwanese cinema last year.

The Bold, the Corrupt and the Beautiful is screening at the 17th New York Asian Film Festival

The story begins with Madame Tang, who hosts an art exhibition with her family members Tang Ning and Tang Chen. In fact, it’s an art exhibition for those rich politicians to have a chance to discuss the bribe. They conspire a land development project, and with Madame Tang’s assistance, every detail of this endeavour should work perfectly, and they can earn billions from the project. However, a homicide disrupts the whole plan, revealing the situation as more complicated than everyone has imagined. Furthermore, the hatred and control relationship in the family also comes to surface, bringing more crisis to each of the characters.

The background of the story is in 1980-1990, which is the rising era for Taiwanese. Countles plots of land become cities and factories, which gives opportunities to corrupt politicians and gangsters to make a huge profit. The movie combines several notorious corrupt events in Taiwanese history, like Liu Bong-Yu’s homicide and Lin Yi-Shih’s corruption event. These combinations make this film a miniature of Taiwanese local politicians-merchant relationship, which ios uncommon to see in mainstream movies.

Besides, the film puts the most focus on the “middle-man” aka “white gloves”, which has almost never been discussed in any Taiwanese film before. The movie shows the elegant, delicate, scheming and evil parts of being white gloves. In other words,  it gives the audience a brand new vision of the bribe system.
The relationship between Madame Tang, Tang Ning and Tang Chen is very interesting to watch. In this film, Madame Tang manages her family like a business, which perfectly fits her work on corruption. However, the way she does it makes the whole family part of a tense relationship. 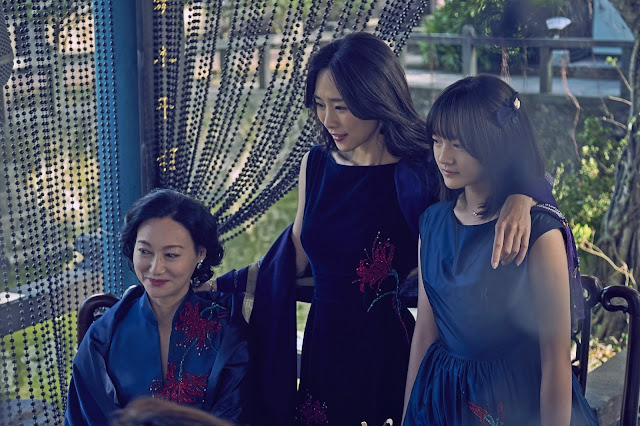 Both Tang Ning and Tang Chen have someone to love. But they don’t want to let the other family members to know their feelings because they are all afraid they will destroy each other. They love each other, so they are willing to maintain this family business. But they all have their own schemes. This kind of love and hate relationship makes their emotions more unpredictable, making it pretty exciting to watch.

The complexity of characters also allows the actresses to explore their acting performances, and it’s a feast to watch them. Kara Hui and We Ke-xi’s performances are quite satisfying, but  when it comes to Vicky Chen, who plays Tang Chen, it’s a different story. She shows so many layers about how a teenage girl feels when she witnesses corruption. Viewers can witness her naive and evil parts at the same time with her eyes and movements. She is only 14 years old, but her performance has already achieved the level that only a few great actresses can reach.

Even though the film is really beautiful in many aspects, it still has flaws. The main theme of the family is “the control in the name of love.” However, the movie doesn’t show it perfectly. The audience can understand that Madame Tang wants to control everything, but they can’t feel the love between her and her daughter Tang Ning. Since the control relationship is established on their love, there should be some scenes about their deep delicate sentiment. But the plot fails to convey the idea with Madame Tang, not to mention the stereotype about the aboriginal tribe and Myanmar.

“The Bold, the Corrupt, and The Beautiful” is an ambitious work about Taiwanese corruption. The plot, actresses, and production design are excellent, but the film is also too ambitious to tell such a complicated story within 2 hours.

Film Review: Someone in the Clouds (2019) by Mitch Lin and Gary Tseng