“Could you believe what I saw?”

Considering most people who will read this are aware of the power of images, many will be familiar with the following set-up. In an experiment, a group of people is shown a specific set of images; the first one may be the image of a smiling baby, a barbecue with friends, or, in some cases, a traffic collision. No matter what the first one was, the second one was always the same face, a man smiling, seemingly at the viewer, who, depending on the nature of the first picture, would react happy, interested or shocked. However, the trick, which was later revealed, was that there was no connection between the images other than the mind of the viewer established. Most likely, the actor in the second picture was just given the direction to smile for no particular reason.

Nevertheless, there have been many experiments like the one mentioned above. The result is fascinating every time, as it not only shows how manipulative images are, but on another level, the extraordinary tool they can be. Of course, this can be both frightening and appealing. One need only to look at the imagery of propaganda in dictatorships or authoritarian regimes ranging from Nazi Germany to present day North Korea to find examples for this observation. To Chinese artist and director Bo Wang the nature of images has always been to be consumed by the recipient, but also as supports for a specific political intention or ideology given the context.

In his visual essay “China Concerto”, which has been given  the subtitle “A Film About Spectacles”, Wang aims to take a look at modern day China focusing on the city of Chongping where he grew up. In an interview with Asian Cinevision, he explains how he was following the “Red Culture Movement” of Chinese politician Bo Xilai when he had the idea of making a film about these events. Born in 1982, he states how he was born in a transitional period in China, when the economic progress, which would come into full effect in later decades, began to take shape. As capitalism and globalization started to re-define the nation, so did the traditions and values of the past fade away, but not quite disappear.

At the core of “China Concerto” we have a female voice-over reading out fragments of letters from an unknown character, whose travels through China have brought up many questions regarding the country’s past and how it is still present in everyday life. Gabriela Jaime, whose voice we hear during those passages, speaks a very accentuated English, the language of a spectator who refrains from judging or adding another layer to the images, or the text she reads out. In general, this narrative approach delivers an interesting framework for any viewer, who is as much of an outsider as the female character reading these passages.

However, this also creates a distinct awareness of the kind of images we are about to see. After all, in a film which shows the ideological, political filters behind a certain image or “spectacle”, the medium itself is a medium using these kinds of filters as well as selections. One should keep in mind, these are impressions and observations, subjective insights into a culture, so they are subjective by nature. At the same time, they are also mere approaches, attempts to explain a condition and make sense of the image beyond its inherent layers of meaning and ideology.

Ultimately, what Wang’s film focuses on is spectacles in the most general sense. Starting with scenes of people dancing and singing, to demonstrations and gathering up to footage, for example, of the 2008 Olympics. While this is still one person’s view, through the editing process one cannot help but find Wang’s theory convincing because of the parallel structure in all these images. Even though their ideological relevance is obvious – for example, when people are dancing to or singing songs about the fruits of socialism and the Party – there is something far stronger in the togetherness these rituals create, a feeling of “unity”. In the end, this is what the “Red Culture Movement” is about: offering a unifying identity through these rituals.

However, “China Concerto” is most fascinating when it talks about the inherent paradox in these images. In a globalized space such as China, history, past and present have been suspended, or rather blended, into something new, a possibility of a future which again unifies these aspects. A scene showing women singing a propaganda song under the neon lights of automobile adverts may show how a new ideology approaches developed from the socialist ashes of the old and the capitalist symbols of a globalized world. In the end, it is all about finding “happiness”, a goal as pervasive as the spectacles shown in the movie.

But there is always the feeling of scenes being staged. At the beginning and in the final part of the film, the voice over mentions Michelangelo Antonioni’s documentary “Chung Kuo, China”, a work which has been famously criticized for showing staged scenes and therefore a false image of China in the 1970s. Through clever selection of footage from this film, from Chinese TV and propaganda films, Wang exposes the staged nature of these events. Like a reporter telling a young boy what he has to say next, nothing in these images looks natural or spontaneous. Much like the nostalgia they try to evade, the past has never fully disappeared, its framework is still intact and has managed to prevail and has been assimilated into our globalized world.

“China Concerto” is an interesting, provokative visual essay about the nature of history, globalization and ideology. Through its editing, the use of voice-over and its cinematography, it shows the images of a country which, paradoxically, is foreign while also strangely familiar. The public spectacle, the longing for unity and something lasting in the fleeting times of globalization are all observations which are now perhaps more relevant than ever. Films like “China Concerto” teach us to be aware of these images, these spectacles and challenge them, for the layers underneath might be treacherous. 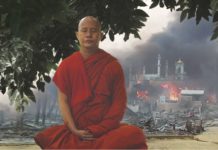 The Venerable W. Releasing on DVD From Icarus Films