Considered by many Takeshi Kitano’s magnum opus, “Fireworks” is also his most critically acclaimed work, as it netted him the Golden Lion in Venice Film Festival and a plethora of other awards, both in Japan and all around the world, despite the fact that the Japanese Academy chose to ignore him again, solely awarding Joe Hisaishi for Best Musical Score, among 10 other nominations. The international success of both “Fireworks” and “Sonatine” established Kitano as the most prominent Japanese filmmaker of his era, thus resulting in the end of his awful psychological condition that had been ongoing for years, even before shooting the latter.

Kitano plays one among his favorite roles as Nishi, a violent police detective, who quits the force due to guilt ensuing from the terrible outcome of an effort to arrest a violent criminal, that left his best friend and partner Horibe crippled and forced to use a wheelchair for the rest of his life. Nishi tries to help Horibe who has suicidal tendencies, but at the same time has to care for his spouse who suffers from leukemia. Furthermore, the Yakuza are on his heels due to a debt he has on them, in order to pay for his wife’s treatment. However, Nishi is definitely not one to succumb to the role of the victim, instead taking the role of the enforcer for himself. In the middle of this is Nakamura, who was also present (and injured) during the aforementioned event, but retains both his friendship with his former colleagues and his capacity as a police officer. Meanwhile, Horibe tries to fight his sense of despair by taking up painting, the same practice that Kitano himself used when he was in a similar psychological position, after a terrible accident he suffered in 1994. Furthermore, the paintings in the movie are actually his works.

Apart from the obvious autobiographical elements in the film, Kitano directs an exquisite movie, where his trademark violence is toned down by scenes of calm beauty, with the paintings, the scenery and Joe Hisaishi’s music being the foremost elements of this characteristic. It is somewhere between the violence and the beauty where the title materializes, since the succession of extremely violent moments and long periods of calmness allows both to appear as sudden fireworks in front of the eyes of the spectator. The balance kept is so precise that one cannot easily realize which of the two elements represents the suddenness of the fireworks and which the norm, with Kitano making a point, through this tactic, of showing both are parts of life.

A permeating lyricism dominates the narrative, but in contrary to many reviewers who found it only applies to the scenes of calmness and beauty, I also find it applies to the violent ones, with Kitano presenting a number of ones that are artistic, as much as they are gory. To achieve this, he benefits the most from Hideo Yamamoto’s cinematography, which succeeds to the fullest in presenting this duality, with impressive framing and coloring. Kitano’s own (with the help of Yoshinori Oota) editing is also great in the same regard, as it implements this “fireworks” tactics to perfection.

All of the above elements are “coated” in Kitano’s great sense of humor, which is simultaneously subtle, sudden (again like fireworks), intelligent, and even slapstick, in a trait that heightens the entertainment aspect of the movie. 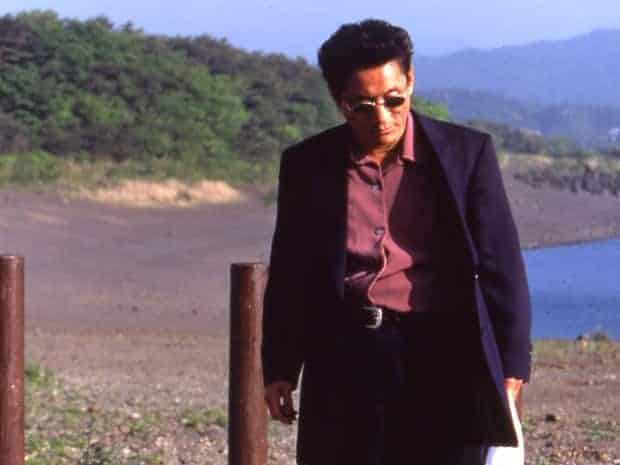 Kitano, who acts in his usual, almost catatonic restraint, offers one of the most accomplished performances of his career. Although violence is a significant part of his persona, his character’s focus is his relationship with his wife: though he loves her with all his heart, even committing a robbery for her, he never actually shows her his feelings, apart from the finale that truly dismantles Nishi emotionally, letting the audience finally perceive the drive behind his actions. Ren Osugi as Horibe is also excellent in portraying the consequences of the incapacitation of a man-of-action, as he actually presents the psychological struggle Kitano had to face when he was in a similar situation. Susumu Terajima is quite convincing as Nakamura, who has the role of the narrator of the story and the “voice of logic”, in a rather unusual for him, and quite restrained role.

“Fireworks” is a true masterpiece of Japanese and international cinema, a film that highlights Kitano’s prowess as an overall artist, and must-see for everyone.