It is often said that no object or human being has a value of its own, we give it value. Some things are so close to us that we can never part with them. In it resides a part of who we are. We often anthropomorphize it and it becomes our best friend. A confidant who sticks with us through thick and thin. Making a movie about such a connection is always a tough task. Directed by the great Ritwik Ghatak and released in 1958, “Ajantrik” is such a movie. It revolves around a taxi driver, Bimal (played by Kali Banerjee) and his car, Jagaddal, a 1920 Chevrolet Jalopy. 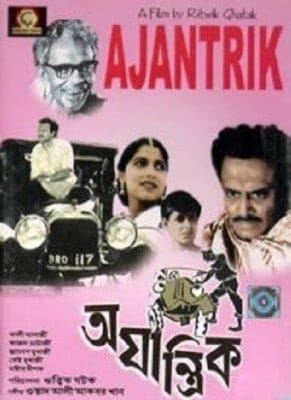 The movie opens with two men urgently looking for a taxi since one of them is to get married that day. They are refused by everyone until they are informed by a boy, Sultan, that there is someone who can take them to their destination. This is where we get introduced to Bimal and soon his car, Jagaddal. Both men are shocked at the dilapidated state of the car and doubt whether this car can make the journey. Yet, even through rough terrain, Bimal and Jagaddal manage to get them to their destination. We come across several situations with people looking to go here or there and Bimal and Jagaddal prove equal to the task. He often gets mocked for the poor state of his car and even gets called a madman. Yet, he never gives up on Jagaddal. In the end, Jagaddal’s age finally manages to catch up and it is sold to a scrap merchant. Bimal is distraught and cries when he sees labourers taking his car apart.

This is a complex movie which, through Bimal and Jagaddal, shows how humans relate to each other. Ghatak manages to anthropomorphize Jagaddal with unique sounds and actions. The sounds are primarily its distinctive horn and the actions being that of its dead lamps turning, as though looking at Bimal. He has an unshaken faith in his car which borders on religious fervour. Jagaddal is the only family he has. In one scene, he tells Sultan that he got Jagaddal on the day his mother died.

The audience is introduced to several characters who hire Bimal at several points throughout the movie. Through his encounters with these people, we also learn more about him. In the early part of the movie, he is hired by a young couple. The woman is beautiful and in one comedic scene, when she touches his shoulder to ask him to stop, he reacts as though he has been hit by an electric current and the car produces a unique sound. Through this woman, the audience also gets to see that despite his tough appearance, Bimal is soft inside and his awkwardness around her indicates he is not comfortable in female company. His life revolves around his car. There is another occasion where he drives fast to help a man catch a train in the nick of time.

An interesting side story that is present in the plot is that of a beggar. He has a bowl which he is proud of and he goes around talking nonsense all day. He has exaggerated actions and around the end of the film; his bowl gets crushed by a vehicle. He is devastated but soon buys a new bowl. He shows it off proudly saying that the old one had hard edges and the new one is so shiny and beautiful. He has moved on with his life. This beggar acts as an interesting contrast to Bimal despite the two characters not interacting in the movie.

“Ajantrik” is a microcosm of human relations. The audience itself is taken for a ride, through laughter, and sadness, and everything in between. All this takes place with the beautiful Bengali culture, and landscape as the backdrop. It is a must watch for any person who has loved and lost.