“Ley Lines” (1999) is the final part in Takashi Miike’s thematically connected “Black Society Trilogy” of crime dramas that began with “Shinjuku Triad Society” (1995) and continued with “Rainy Dog” (1997). As with those films, Miike’s eyes are once again fixed firmly on the underclass of immigrants, prostitutes and criminals who are struggling to survive in the hostile environment they find themselves in.

The film follows three young men of Chinese descent living in a rural part in Japan. Ryuichi (Kazuki Kitamura) is struggling to get his immigration papers due to being on probation. He decides to leave his small hometown and travel to Tokyo to seek his fortune. He is joined by his friend Chan (Tomorowo Taguchi), a fellow gang member, and his younger brother Shun (Michisuke Kashiwaya), a keen student and less inclined to violence.

After their arrival the three men run into a prostitute, Anita (Dan Li), who is working on the upper floor of a noodle shop they are dining in. The young woman, no doubt perceiving the naivety of the three country boys, tricks them into following her to an abandoned building with promises of sex. After she steals their money and escapes, the three are left destitute. Without money, the correct papers, or any perceivable skills, the young men are left in a difficult situation.

After meeting a drug-dealer named Barbie (Samuel Pop Aning), a Ghanaian immigrant, in a toilet, Ryuichi sees a potential escape from their predicament. They soon become involved in dealing the drug Toluene in an attempt to make back some of their lost money. This venture turns out to be a success as they flog their product on the streets of Tokyo.

Later, one of the men sees Anita walking through Tokyo, bloodied and unkempt after being abused by one of her clients. The woman soon becomes friends with the three men, spending time with them after one is beaten up. The men find themselves in trouble with a violent gang due to their involvement with the drug trade. In order to escape, they plan a daring raid on the gang to steal enough money to get out of Tokyo. 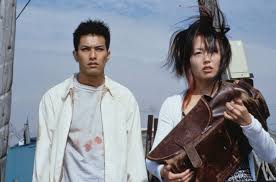 Writer Ichiro Ryu creates a great cast of likeable characters, each with their own particular quirks. The script also manages several tonal shifts from comedic to horrifying, moving seamlessly from scenes of elation as we see the men attempting to push their Toluene on unsuspecting pedestrians, to a scene of terrifying sexual violence perpetrated against the prostitute. None of this seems out of place, rather it helps to create a world that has both light and darkness, humour and tragedy.

Takashi Miike is highly regarded for his unique style and directorial flair and this film is no exception. There are elements here that would later come to define his work, such as the strong violence, including sexual violence, and black comedy. Miike also uses a staggering array of techniques to create a textured work that showcases his creativity. Along with cinematographer Naosuke Imaizumi they capture a world that is real and exciting.

The film also uses hand-held camera work to fantastic effect, as we follow the characters around, feeling as though we are part of the drama. A great example of this technique is when the camera runs through a train station early in the film and onto the train behind the characters, later morphing into the viewpoint of Shun. These long hand-held takes help increase the sense of realism and bring us closer to the action. 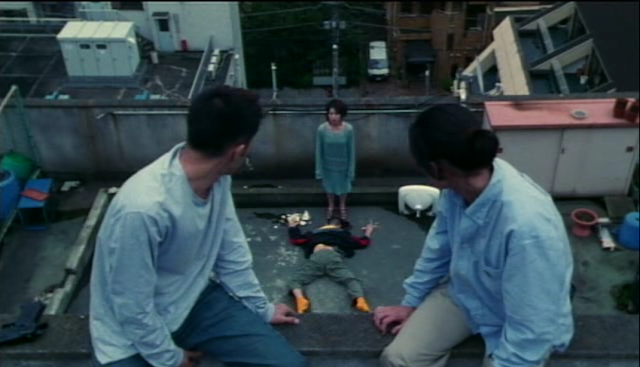 All of the main cast do a great job with their characters. Kazuki Kitamura as the leader of their small group is understated, with his anger and determination evident in a quiet, subtle way. Tomorowo Taguchi is a delight as the comedic Chan, whose upbeat naivety often prevents the film from becoming overly sombre. His character, with his unconventional speech including English phrases and child-like enthusiasm make all of his scenes enjoyable. And Dan Li gives a powerful performance as Anita with some difficult scenes.

“Ley Lines” shows us the hardships of life of immigrants and the almost impossible decisions they are forced to make. In an early scene, we see the young man refused his immigration papers because he is on probation. The characters seem to be trapped in a no-win situation and downwards spiral of poverty and crime brought on by their immigrant status. At every turn, characters are struggling, either for money, to get a passport, and face the constant threat of assault. At the end of the film, you have sympathy for the main characters.

“Ley Lines” is an thrilling ride with a strong social conscience and a fitting conclusion to a trilogy of films that are sure to stand the test of time as among the greatest of Japanese crime dramas.
Advertisement