“Visitor Q” was filmed as the sixth and final part of the Love Cinema series, consisting of six straight-to-video releases by independent filmmakers via a brief but exclusive run at the minuscule Shimokitazawa cinema in Tokyo. The six films were conceived as low budget exercises to explore the benefits afforded by the low-cost Digital Video medium, such as the increased mobility of film and the low-lighting conditions available to the filmmakers.

The script revolves around the Yamazakis, a family of four, all of who are quite disturbed individuals. Kiyoshi, the father, is a former reporter trying to shoot a documentary on violence and sex among youths. Therefore, he spends his time recording Takuya, his son, on camera, while his classmates bully him; he also occasionally has sex with his prostitute-daughter, Miki.

Takuya, frustrated by the constant bullying, takes out his fury on his mother, Keiko, beating her over any insignificant excuse, even in front of his indifferent father. Keiko finds solace in drugs when she is not prostituting herself. Eventually, an individual unknown to them establishes himself in their house, proceeding subsequently into torturing all of them. Through actions including incest, murder and necrophilia, chiefly caused by the stranger’s presence, the Yamazakis manage to become a family again.

Miike incorporates in “Visitor Q” the aesthetics of a reality show, thus resulting in a film that resembles an experiment of what would happen if he were to direct a sitcom. He presents an inordinately problematic family, whose members still appear to function in an orderly fashion, where each one plays a role, without ever questioning the obvious pervasiveness of each other.

His characters portray the archetypes of the decaying contemporary Japanese society. Kiyoshi, who feels humiliated due to his labor failure, sexually ignores Keiko, who feels deprived. Takuya is a spoiled brat who receives and delivers violence and Miki has neither sense of purpose nor direction in her life.

His message is quite a pessimistic one: There is little hope for the modern family, whose only chance of maintaining the institution resides on the intervention of an external force. 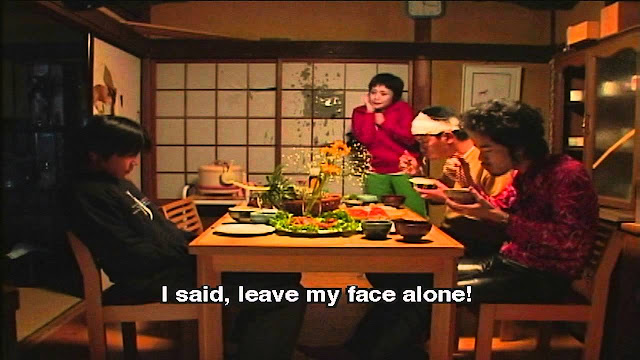 Hideo Yamamoto’s cinematography is obviously limited, considering the medium and the minuscule budget, but this low-budget, no punches-pulled depiction of the grotesque events occurring in the film seems to fit the general atmosphere of the film perfectly.

The acting, as is usual the case in exploitation films, is not on a very high level. However, Kenichi Endo as the epitome of the passive aggressive (not to mention totally pervert) Kiyoshi, and Kazushi Watanabe as the “Torturer without a cause” provide some very fitting performances.

In conclusion, “Visitor Q” is a grotesque study of the human psyche, by a filmmaker who has transformed the rape of our aesthetics into his means of expression.