Mostly shot in the exquisite Bako National Park in Sarawak, “Nota” is a rather unusual film that begins as a social drama about a failing couple and ends as a surrealistic thriller. Let us take things from the beginning, though. 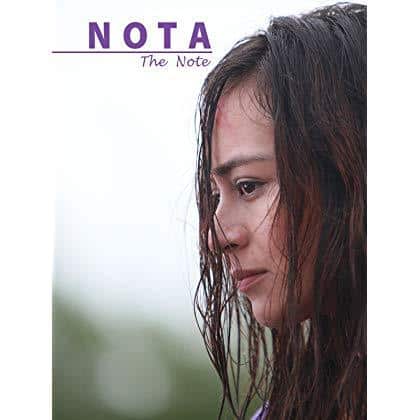 Kamal and Erin face a marital crisis, particularly due to their failure to have a child, something that has driven them quite apart, particularly from Kamal’s side. While the happy memories of the past do exist, the melancholy and the sadness of the present have taken over. Eventually, Erin discovers a note written by her spouse that states his intentions of ending their marriage. Seemingly to reinvigorate their relationship, she asks him to travel again to the Bako National Park, where they have spent some of their happiest moments. Their trip however, proves rather eventful, as their path to the park is interrupted when their taxi driver is killed in the middle of nowhere by debt collectors, and the two find themselves in a ghost town, where a more than creepy man named Jemat, “forces” them to spend their night in his house, before he eventually takes them to the park. As Erin gradually discovers the reasons for Kamal wishing to end their relationship, a rather dangerous plan is shaped in her mind, and Kamal is no longer the creepiest person around.

With a basic goal of highlighting Sarawak as a whole and the Bako National Park as a tourist destination, and beginning as a drama about a married couple on the verge of ending their relationship, one would expect a mellow, romantic film, that would mostly draw from the attraction of the area. However, and despite the fact that the film starts like that, Yasu Tanaka ends up directing a film where dream (which eventually becomes a nightmare) and reality merge in order to present a spectacle that is shocking at it is beautiful.

This transition begins as soon as the couple arrives at the area, with the murder of the taxi driver providing the split for the radical changes in pace and aesthetics. The sense that something is not right is intensified by their meeting with the creepy guide, who tells them stories of killing crocodiles, while he emits a rather dangerous aura. Erin’s behaviour at this point reveals the first elements that something is not right with her also, as she seems mostly amused by this weird man, and shows no impact from the murder she experienced just a bit ago, with Kamal having a completely different attitude.

As memories of the past and plans in her head mingle with reality, the film takes another path, somewhere between the dreamy and the nightmarish, while surrealism, along with some elements of expressionism, takes over. The reality of what is actually going on, though, is not missed at all, and soon hits the spectator quite hard, mostly in a rather shocking scene between Jemat and Erin, which reveals the reality inside the dream, along with who the really dangerous one is.

This mixture of elements is what makes the narrative of the film unusually intriguing, with Tanaka managing to balance all of the aforementioned aspects in impressive fashion.

“Nota” however, does not fail at all on its original purpose, of highlighting the beauties of the area. In that fashion, Maximilian Schmige’s cinematography is one of the best assets of the production with him capturing both the impressive natural setting and the overall dreamy atmosphere to perfection, with the selection from a music library called Big Bang &Fuzz and Christopher Higgs’s sound also adding much to this last aspect. Yasuhiko Tanaka’s editing follows the tribulations of Erin’s mind quite closely, while inducing the film with a pace that suits its aesthetics perfectly.

Maya Karin is impressive as Erin, particularly through the transformation of a seemingly “normal” woman to something completely different and extreme. Hans Isaac is simply functional as Kamal, in a rather small role, while Ramli Hassan is great as Jamat, constantly emitting a sense of danger with every move and word he utters.

“Nota” is an unusual but quite intriguing film, which definitely deserves a watch for both its narrative style and the depiction of its impressive setting.

Interview with Yasu and Bea Tanaka: Mr. Hassan used a perfect word to describe the work I attempted; Landscape vs Mindscape.