Jet Leyco is a critically acclaimed Philippine filmmaker based in Manila. In 2009, he graduated cum laude at Far Eastern University. He gained filmmaking experience while doing internship for cinema masters Khavn Dela Cruz and Lav Diaz. He has directed a variety of short films and the feature films like EX PRESS (2011), LEAVE IT FOR TOMORROW FOR NIGHT HAS FALLEN (2013), and TOWN IN A LAKE (2015), each respectively competed at various film festivals like Rotterdam, London and New York. All of them respectively won numerous national and international accolades and awards. Furthermore, he teaches Film Appreciation at Asia Pacific Film Institute, and also provides digital content for advertising – which he thinks is a performance art.

On the occasion of “Town In A Lake”  screening at the exground filmfest, we talk to him about his cooperation with Lav Diaz and Khavn, the film in detail, casting, Filippino cinema and other topics

You have worked alongside Lav Diaz and Khavn. Can you tell us a bit about those experiences?

I worked with them as an intern. I was a junior college student then. It was a very meaningful year because all I need to learn about alternative cinema, I’ve got it from them and from the people who were part of the their process (cinematographer, production manager etc). 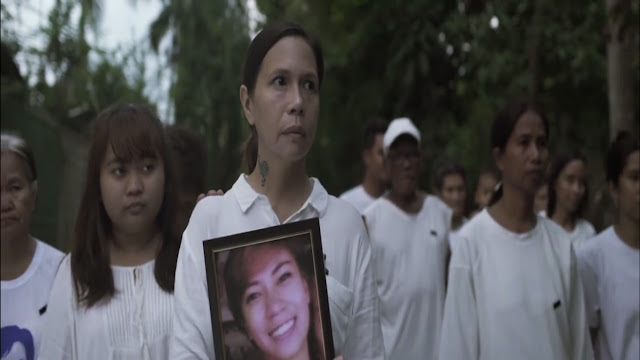 In your previews films, you were also the editor and scriptwriter, but in Town in a Lake, Tristan Salas was responsible for both. Did you find this easier, having someone else do the editing and the writing, or do you prefer doing it on your own?

Tristan Salas was the cinematographer, I’ve worked with him since college, so basically, we know each other’s personality (taste in cinema).

I can’t say that it’s easy, because every film has a different process. All we need was to communicate the ideas or vision. Contextualize the script. Tell the story.

Brian Gonzales, the editor and scriptwriter, has been my best friend for ten years now. We are both cinema enthusiasts, we argue and discuss films that we watch.

I think the beauty of cinema is that it makes people talk on the set, in principal photography or even in post production, step-by-step — we have this discourse for hours to analyze the result of our work.

I can’t answer this. I made “Town In A Lake” to create a statement. To raise questions.

All my answers are in the film, some of my opinion about these institutions, and the corruptions are tackled in the film.

The girls are eventually revealed as homosexuals, and their mothers seem ashamed of the fact. Is this the common attitude towards homosexuality in the country?

I can’t say it’s common, and I think the mothers in the films are not ashamed of the fact. Maybe one of them but not both of them.

Well, I can’t say that its a common attitude — but it was based on my experience. My older brother is a transvestite, and I have cousins and friends that are lesbians.

I’ve seen and heard a lot of discrimination towards LGBT, especially from the older generation.

Amante Pulido is great in the film. Why did you choose him for the role and how did you guide him?

A friend of mine, Moira Lang — refer the actor to me. I had never seen Amante act in a lead role. But when I saw his physical features, I said he fits the character and  it will be my job to guide/direct/motivate him through the process. It was a bit of difficult at first, because he acts for television — and their process is very  different than in film-making. I think — my assistant director and staff also had a huge responsibility guiding him.

In general, how do you choose your actors?

I choose my actors based on their capability to understand the character, and the film itself.  Sometimes, I choose them based on their features, because it helps a lot in creating an image. There are times when I asked my close friends to refer a particular actor/actress.

I don’t choose actors base on their status quo or if they are famous or not.  Sometimes, I talked to the actors and I just have the instinct that they can pull off the character.

What is the current situation in Filipino cinema?

The current situation of Filipino cinema is grounded by politics and economics. We are still trying to figure out how to distribute our films locally (successfully).The long battles with commercial theaters. Film literacy — I don’t know. People nowadays have easy access to different kind of films. That’s an advantage I think. People are coming to watch alternative cinema — and were able to engage in a discourse — I think that’s great.

Some of our films were made of small budgets from local festivals, shot and edited in a short period of time.

I can’t say much because I’ve only seen less than half of the Filipino films. But sometimes, the film suffers because of this process. I re-edited “Town In A Lake”, because I was not satisfied before it premiered in Philippines. It took me more months to finish it. And almost a year to screen it internationally (first in Singapore IFF).

But one thing I know, Filipino cinema is evolving as the country is also evolving into something we don’t know yet.

Now, I want to create a straight up genre – horror, constructed for mainstream audience. I’d like to think its a challenge or a new venture.

There is also one project, which is a sort of documentary-experimental, with a total different process, and also personal — that I’m currently working on.

There is no future. Only now.

Interview with Jet Leyco: I made “Town In A Lake” to create a statement. To raise questions.