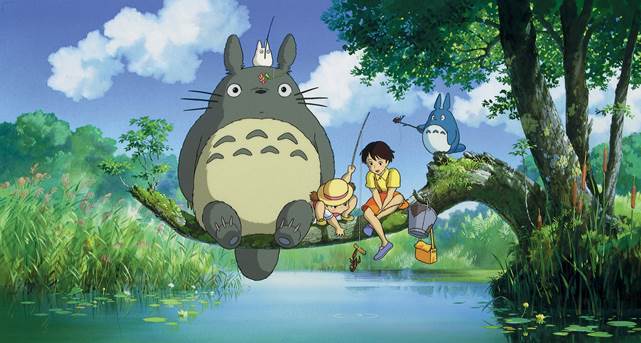 “My Neighbor Totoro” and its titular character, are among the most iconic releases by Studio Ghibli, with the fame and the status of both growing significantly through the years, in a tendency that still continues. In that fashion, while the film only grossed $6.1 million at the box office, it went to gross approximately $266 million from home video sales and at least $1.142 billion from licensed merchandise sales, adding up to at least $1.414 billion in total revenue, as of 2018.

Studio Canal is releasing the film as a limited-edition 30th Anniversary Box Set which includes a Doubleplay (DVD and Blu-ray) edition of the film, packed in a deluxe oversized rigid box with brand new exclusive artwork and holographic numbering. Packaged with a 176-page hardback The Art Of My Neighbour Totoro book, the Box Set also includes artcards, a 16’ x 24’ poster featuring original Japanese theatrical artwork, a premium heavy cotton tote bag, a Magnetic sticker set and a Hardback My Neighbour Totoro Notebook, all exclusive to the 30th Anniversary Edition.

The story revolves around two sisters, Mei and Satsuki, who suffer from their mother’s lengthy stay in the hospital due to a long-term illness. Eventually, they discover another reality, which only they can witness. The one in charge of this reality is Totoro, an iniquitous creature that seems to live in a tree outside their house. The three of them together will shape an alternative, fascinating everyday life, although the pain for their mother’s suffering still remains.

Miyazaki creates a universe where childhood and its perspective of the world is the rule, with the Japanese master highlighting, once more, his knowledge of children’s psyche. This trait extends both to character creation and the animation of the two girls

, whose movements are impressively natural and realistic, and even succeed in portraying their age difference.

At the same time, he presents the concept of fatherhood in its most ideal form, through the character of Tatsuo, who is always willing to listen and interact with his daughters, even in their most extreme behaviour, all the while protecting them, without, though, restraining their freedom and imagination in any way.

Quite frequently in Miyazaki’s films, nature and humanity live in harmony, with his idea that people could and should live in nature or, at least, coexist in harmony being quite evident. This concept is one of the most central in “My Neighbor Totoro”, where nature, in the form of Totoro, seems to take care of the children, during the hardships they have to experience due to their mother’s situation. This aspect benefits the most by the drawing of both the bucolic surroundings and the fantastical creatures, whose rabbit-like appearance can be easily described as adorable.

All the above are presented through much humor and a, generally, happy go lucky approach, but Miyazaki does not fail to retain the sense of drama deriving from reality, with the help of the masterful music of Joe Hisaishi. However, fantasy is the element that eventually takes over, through the trips the three protagonists experience together, with the one in the cat-like vehicle being probably the most impressive.

Not much more to say about this, “My Neighbor Totoro” is one of the best works by Miyazaki and Studio Ghibli, an anime whose value remains unchanged through the years, and a must see for everybody. Studio Canal’s edition provides a great opportunity to revisit it, as the ultimate edition of the title.

Join the Film Team’s Watch Party of Lupin III: The Castle of Cagliostro!

Anime Review: Nausicaa of the Valley of the Wind (1984) by Hayao Miyazaki

Netflix, a Book, Theme Park and Two New Films- Studio Ghibli 2020 and Beyond

Miyazaki’s “Spirited Away” is finally set to show in Chinese cinemas.