With a brief tweet the streaming giant Netflix has announced that a new addition to the “Ghost in the Shell Universe” is officially in the making.

The upcoming brand new series, called “Ghost in the Shell: SAC_2045” will premiere in 2020 and will be co-directed by Shinji Aramaki from “Appleseed” and Kenji Kamiyama from “Ghost in the Shell: Stand Alone Complex”. It will be a collaboration between studios Production I.G. and SOLA Digital Arts. 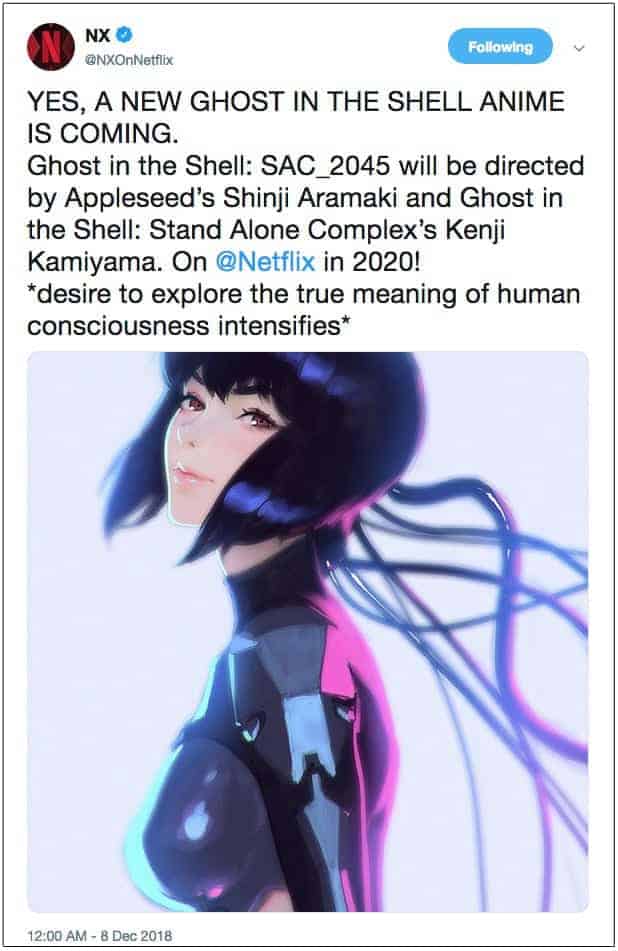 Lots of media attention and hype had been gravitating around the last attempt to progress the popular “saga”, the controversial Rupert Sanders’ live action 2017 movie, casting Scarlett Johansson in the lead role of cyborg Major Motoko Kusanagi and triggering a huge debate about Hollywood’s whitewashing issue.

“Ghost in the Shell” was originally a hugely popular manga series, written and illustrated by Masamune Shirow. In 1995 it was adapted into an anime film of the same name, directed by Mamoru Oshii (followed in 2004 by “Ghost in the Shell 2: Innocence” and by spin-off series “Ghost in the Shell: Stand Alone Complex”) and quickly became one of the most influential science-fiction movie of the 21st century, credited to have inspired many other following films.