Sometimes you chase a dream and sometimes you chase an obsession.  The dream can be an illusion and the obsession can disappear in the breeze of reality.  “Tokyo Idols” portrays the dream of nearly 10000 teenage girls in Japan who consider themselves as “idols” and perform to entertain their fans. The majority of those “fan-base” are formed by middle aged people (mostly between 40 – 50 years) and their obsessions for these teen aged idols. The docu-drama tries to bring out the life and career of these idol girls through a completely different and complex sexual perspective, touching the socio-economic life in Japan in an introspective manner. 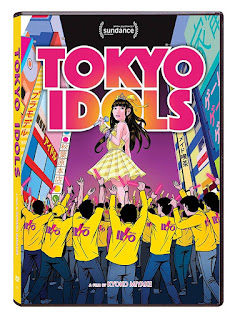 Rio is a teenage idol with number of fans and followers. She is 19 and approaching towards the fag end of her career as  an idol which ends as the girls become “strong women” or mature.  She wants to pursue a career as recording artist. Rio’s best fan (as the film portrays) Koji, spends thousands of dollars on her. Kojis is 43 and attends most of her concerts and even takes part in the music videos, dancing beside Rio. He considers himself as a hardcore fan of Rio or an “otaku” as is the term in Japan. Koji attends all her promotional and handshake events too.

The handshake event is special event where the fans get an opportunity to meet and shake hands with their idols and can take photos with the girls after paying a specific amount for it. The narrative moves on as Rio launches her alternative career by creating “Rio Trans-Japan Campaign” . The film continues under the shadow of a platonic relationship between Rio and Koji with a flair of a strange sexual feeling and a dream far from reality.

The journalistic approach of “Tokyo Idols” makes it more informative and questions the current socioeconomic condition of Japan. It highlights the lifestyle and gap in the relationship between men and women where older men do not intend to have a steady relationship and continue to search their lust in teen idols. And strangely, the lust has no sexual connection and even a handshake of a few seconds with the idols gives the fans a feeling of sexual satisfaction. It highlights a stressed out society failing to take the burden of economic pressure (or something else?) that chase a dream which is nothing but an illusion in most cases. The idols mostly lose their fan-base as they cross the barrier of “teen” and, strangely, their purity and acceptance lie on their virginity to all the fans and followers.

“Tokyo Idols” is a director’s film and Kyoko Miyake does a splendid job by crafting out an interesting narrative out of a difficult and controversial subject. The documentary approach with short scenes and slick editing by Anna Price makes “Tokyo Idols” an interesting watch. The photography of Van Royko exploits the script beautifully and the music of David Drury is interestingly poised.

To summarize, “Tokyo Idols” deals with a difficult socioeconomic issue of contemporary Japan and comes out with many correctly raised, thought-provoking statements.

Interview with Kyoko Miyake: “I believe there is a growing disconnect between men and women in Japan”