My trip to the unknown paths of Asian animation, continues with a Japanese stop-motion animation (yes, not anime), from a man whose bio includes the following terms: painter, sculptor, doll-obsessed model-maker, director of the studio Yamiken and rising talent of stop motion animation.

In the distant future, mankind attains longevity through gene manipulation. However, in exchange, the ability to reproduce is lost. Clones were built to maintain the dwindling workforce, but 1200 years they rebelled, eventually inhabiting the lower depths of the world. The humans, suddenly finding a need to understand their subterranean-dwelling creations, launch an ecological study. What they discover is that the clones have transformed into a vast array of absurd and terrifying monstrosities, although the humans themselves have also changed much.

In that setting, the story revolves around one of those “explorers,” who finds himself found by three strange creatures that get him to their boss, a doctor who transports his head into another body, with the whole team eventually starting calling the newly manufactured creation, God. God’s odyssey, though, does not stop here, as he soon finds himself roaming the labyrinth of the underground, meeting new friends and foes, all the while trying to determine what exactly he is doing there. In his travels, he meets the people of another lab, who are dominated by extremely strong females, a man who tries to con him, another man who has been standing alone tending a fire, a strange girl and her monstrous friend, and many others individuals and monsters. Eventually, he becomes God again, his true story is revealed and he is reconnected with the three initial creatures in a battle against the worst monster of all. 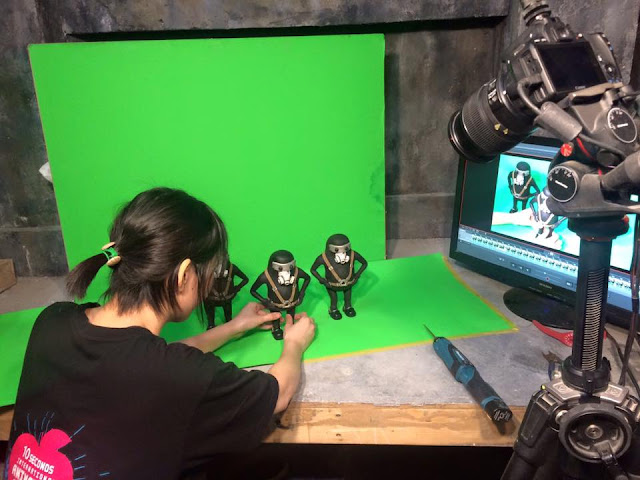 The first thing one notices in the film is the impressive creations of the characters and creatures, who seem to be a combination of the fantasies of HR Giger, Hieronymus Bosch, and the kind of creatures usually found in survival horror video games, with the movie occasionally functioning like one. What is even more impressive, as revealed in the ending credits, is that both the characters and the setting are actual built models, and not the product of CGI, in a trait that highlights the amazing craftsmanship and imagination of Takahide Hori and his crew. The same applies to the setting, a combination of dystopian and cyberpunk elements.

All of the above are presented in a fashion that occasionally function as an animated version of “Tetsuo”, as God is running frantically through corridors, hunted by monsters, while rapid electronic, industrial and noise tracks are playing in the background, and the film transforms into an extreme music video, filled with gore and blood. These scenes feature some frantic camera movement and very fast cuts, in a tendency that highlight Takahide Hori and Tetsu Kawamura’s editing.

The slower moments are not missing though, with Takahide allowing his audience to admire the setting and the characters, while presenting his sense of humor (mostly deriving from the fact that some consider the main character as God) and a number of symbolism regarding the modern society. This last element includes the conman, the worker who does not stop doing his work even when he does not know why he keeps at it, the cruel bosses that take advantage and mistreat their workers, how easily public opinion can change about someone, even in the most extreme difference, from nobody to God and how one man’s actions can impact the whole world. Lastly, in this “mad” setting, Takahide even managed to fit some minor elements of romance. 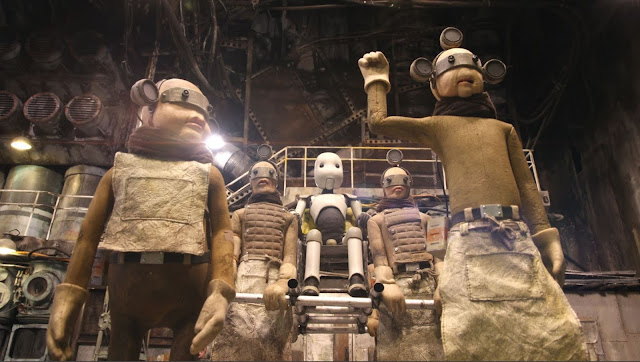 What one realizes after a fashion is that the film is virtually silent, with the only words uttered actually being incoherent sounds, which are translated into actual words through the subtitles. This, rather unusual trait, seems to work quite well in the setting of the film, as it allows the spectator to focus on the extraordinary images rather than the dialogue.

“Junk Head” is a truly great spectacle that highlights the many talents of Takahide Hori, proving that stop animation can be at least as good as the masterpieces of anime. Personally, I cannot wait to see the sequel…