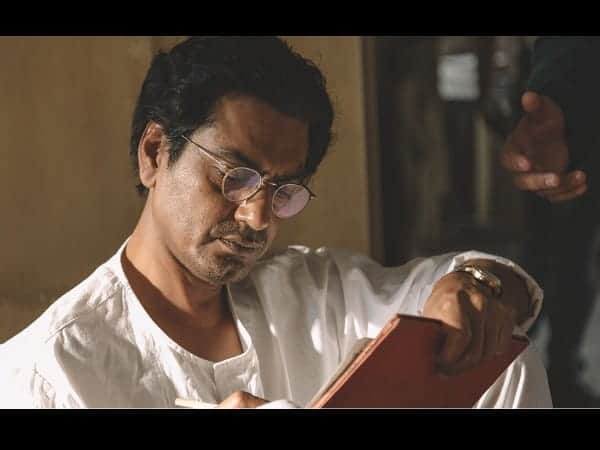 From the very first scene, we are introduced to the world of Saadat Hasan Manto in Nandita Das’ “Manto”. It is not his life that we are introduced το, but the world of ideas that constantly took shape in his fertile imagination; however, we do get into the world he lived in in the very next scene. It is the world of a colonized India on the brink of independence. After World War II, it seemed likely that India would get its independence, however people were still unsure about the circumstances it would come in.

In a emotionally moving scene from the movie, Manto, a free-thinking Indian Muslim looks on from the window of his bedroom the euphoria of people celebrating outside, there are fireworks all around and optimism about the future. He asks his wife to join him and look at the spectacle, he picks up his young infant and whispers, “You must remember that you were born in an independent India”.

As history bore witness, the moment of euphoria was followed by crushing despair as inter-religious violence and rioting spread across the country in its partition. Two independent nations, India and Pakistan were formed. While Hindus overwhelmingly wished to align themselves with India, Pakistan was a separate nation for Muslims. As a Muslim born and bred in undivided India, Manto held on to the city he loved, Bombay, its film industry which was in its nascent stage, and a group of writers with whom he was associated. However, this didn’t last long.

What remains in this film is the attempt at capturing a country torn by violence, in similar vein to Das’ previous film as director, “Firaaq”. But here the story is centered around Manto, the famous craftsman, who crafted ingenious stories from the life he saw around him and the society he was a part of, an ardent believer in freedom of speech and literature, which deals with complex characters and delicate social situations. The story follows him from his Bombay days as he ultimately migrated to Pakistan and the subsequent attacks by state censorship on his stories.

The look and feel of Das’ film is enough for the viewer to be willingly swept away in its world, looking back wondrously at a time gone by, that was critical to our history as an independent nation, making the viewer consider the relation between art and life through Manto’s life and five of his stories, which are evenly spread across the film’s running time. It makes us consider the nature and circumstances of our independence, as in the words of the poet Faiz Ahmed Faiz, “jiska intezar tha, ye woh subah to nahi” (“This is not exactly the dawn we had waited for”). It is an endearing yet tragic film, endearing as the world knows and holds its protagonist in high regard, and tragic as it is about a proud and unparalleled artist whose life withers away due to his inner struggles and difficult social circumstances.

For a keen observer and lover of the sub-continent’s literary history, there is a lot from which sheer delight can be drawn, be it the appearance of notable literary and film personalities of the time played by a large ensemble of very good actors, or the presentation of the Indian film industry in its infancy, operating out of Bombay Talkies.

There is no shortage of filmmaking craft in this film, and yet what remains is its inherent simplicity and empathy. Das creates Bombay and Pakistan of the 1940s with intricate detailing and a humane perspective. Also the writer of the film, she never lets the story descend into literary or political jargon, or lets the technique stand out jarringly, effectively maintaining the delicate balance which the film needed to have. One could question the use of free use of Manto’s stories in a film which was meant to be about his life, but these sequences are well placed and often appear at just the right time during the course of the narrative, never disrupting the flow but always adding something to the central plot.

The camerawork by Kartik Vijay is observant as it makes the visual aspect of the film look deceptively simple. However, there are shots and scenes where one sees complex composition, in the scene featuring Paresh Rwal and Tillotama Shome, in the picturisation of the story “Thanda Gosht” (Cold Meat) or simple the energy with which the camera glides across a Bombay Talkies film party. The narrative is well paced, never overstaying its welcome with a crisp running time of under two hours; however there are portions which are done away with too soon, leaving the viewer wanting more. For instance, the events which lead Manto to make a hasty decision in the middle of the night and pack his bags to leave his beloved city behind seems almost to come at the viewer arbitrarily, rather than as an organic effect of Manto’s experiences.

It may be so that some viewers are unable to be invested in the story, irrespective of all the good work done, but what one cannot possibly ignore is the complete embodiment of Manto by Nawazuddin Siddiqui. Not only the appearance of the character, but the spirit of Manto, his fears, insecurities, moments of creative genius and willingness to soldier on, despite hurdles are communicated with such clarity by Siddiqui that one may simply marvel at the nature of the performance. It is the work of an actor who knows his craft inside out. Also supporting him is the brilliant cast, with wonderfully humane portrayals of Shyam Chadda by Tahir Raj Bhasin, Safia(Manto’s wife) by Rasika Duggal and Rajshree Deshpande’s charming appearance as prominent female Urdu writer Ismat Chugtai. Also making memorable brief appearances are actors like Paresh Rawal, Divya Dutta and Rishi Kapoor, to name a few.

Hence, the film is a heartfelt portrait of a writer who has been much loved in the Indian subcontinent. Also, it paints a vivid picture of a country that had just gained independence, something which it fought hard for and was almost immediately plunged into the turmoil of partition along religious lines. The incident had a deep effect on Manto and troubled him for the rest of his life, as he reluctantly left the city he loved, Bombay, to move to Pakistan. It is a sympathetic look at the riot-torn nations of India and Pakistan through the eyes of an artist who himself deeply felt and intricately expressed the woes of Partition.

Powered by a keenly observed and deeply sensitive portrayal of the writer sensitive to the turmoil around him from Nawazuddin Siddiqui and an acting ensemble that rarely ever skip a beat, Manto is a truly remarkable film which is going to intrigue audiences irrespective of their familiarity with the artist’s writings.