Based on a manga from Ikki Kajiwara, Miike teams up with Ikki’s brother, Hisao Maki to write the screenplay. After “The Human Murder Weapon” (1992), this was their second project, followed up by many more cooperations like “Family” (2001) and “Waru” (2006).

This is one of Miike’s earlier works that went straight to VHS. The very basic yakuza story evolves around Naoko Kiba, who protects a thug called Junpei who stole 500 Million Yen from an Okinawa gang. 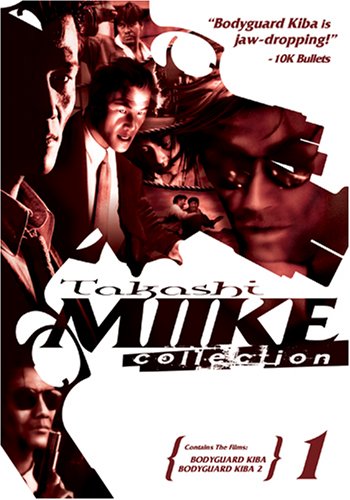 Although “Bodyguard Kiba” was produced pretty much at the beginning of his career, the movie shows the typical Miike handwriting: Set in a brutal yakuza world, straightforward story, sex, and a criminal hero. Besides, most of the story takes place in Okinawa and a lot of dialogue is spoken in the local accent. Referring to a Japanese minority, Miike is not the first, but one of the few directors at that time, who dared to shoot almost an entire movie on the Okinawa islands. This shows his interest, at least on a superficial level, to deal with parts of the society which are underrepresented in Japanese cinema. Later films such as “City of Lost Souls” (2000) or the “Black Society Trilogy” (1995-1999) continue Miike’s mission to represent a multicultural society.

There are not many scenes that seem to be superfluous and Miike manages to keep a fast pace, which is sometimes a problem with his other movies. This is mainly owed to an interesting mix between yakuza drama and martial arts elements. In the nicely choreographed fight scenes, the former boxer Yamato Takeshi, can fully show off his skills as Bodyguard Kiba.

Takeshi’s acting skills lag behind his fighting, though. He is very stiff and emotionless. Daisuke Nagakura as Junpei is more eloquent. His on-screen relationship with Ryu Narushima is convincing and carries a big part of the story. Also worth mentioning is the appearance of Ren Osugi (“Audition” 1999, “Hana-Bi” 1997), who plays the yakuza boss. As usual, Osugi delivers on-point acting and Miike was fortunate to obtain him as the villain for his movie.

Compared to later productions, “Bodyguard Kiba” isn’t hitting so much on the dark psychopathic tones. It contains a certain amount of violence, but it is nowhere near other Miike films such as “Dead or Alive” (1999) or “Ichi the Killer” (2001). This is due in most part to the Martial Arts scenes, which are a homage to old Hong Kong movies. The second conflict in the movie, the rivalry between the karate schools, distracts from the criminal activities and puts Kiba often in an athletic competition.

The shots were surprisingly good. Especially the scenes shot on board the ferry are very impressive and are among my favorite Miike sequences. In these scenes, the film establishes the subplot of male bonding between Junpei and Kiba. The story, which is also a story about betrayal, puts the two men into a relationship not only based on money but on brotherhood. So all in all the movie is fairly entertaining and its characters are able to add dramatic weight to the story. Miike shot two sequels of “Bodyguard Kiba” in the following years, proving his status of being a filmmaking machine once more.