While the specific sociopolitical moment (the re-emergence of censorship in China affecting the line-up of this year’s Berlinale with eliminating Zhang Yimou’s “One Second” from the official competition due to “post-production issues” being only the most prominent example) surrounding the world premiere of “So Long, My Son”, the newest film by the Chinese 6th generation director Wang Xiaoshui, might be forgotten in the next couple of months, the film itself, the skill it was filmed with and its social relevance are here to stay with us for quite a period of time.

The world premiere at Berlinale was crowned with the double Silver Bear for both of the leading actors and more of the festival exposure is likely to occur for Wang’s three-hour epic, examining the social and humane cost of the decades of the “one child” policy in China.

So Long, My Son was screened at
Berlin Film Festival

For the first hour of the film, the viewer might get lost in places, time frames and the network of secrets, lies and relationships between the characters. The film opens in mid 80’s at the river bank somewhere in the north, where one boy, Haohao, tries to convince another, Xingxing, to go to the water. In the next one, we see Xingxing, now a teenager played by up and coming Roy Wang, being his rebellious self, playing video-games at the dinnertime to disapproval of his caring mother Liyun (Yong Mei) and his more stern father Yaojun (Wang Jingchun). However, in the following scene shot discretely from afar, a boy got drowned and his family, Yaojun and Liyun, as well as their friends carry him on their hands to the hospital. So, did Xingxing survive the drowning somehow?

As it plays out, logically, he did not and the “new” Xingxing is the boy adopted before or when Yaojun and Lijun left their home in the north and moved to the southern coastal town of Fujian where they, unlikely many northern immigrants chasing quick cash, live a quiet life and keep to themselves, not even speaking nor understanding the local dialect. Xingxing, raised as a typical member of the generation of “little emperors” (the term forged for boys in particular during the years of “one child” policy), runs away from home when the trouble he was looking for finally finds him.

Meanwhile, in the series of flashbacks, we learn about Haohao’s parents, the Party official Haiyan (Ai Liya) and Yingming (Cheng Xu) and the role they played in Liyun and Yaojun’s life. Liyun was “encouraged” by Haiyan to follow the official policy and abort her second child, which left her unable to have more children in the future, while the relationship between Yaojun and Yingming’s cousin Moli (Qi Xi) hired as his apprentice in the factory grows out of professional limits.

From the description, the plot seems melodramatic with lost sons, prodigal sons and sons born outside the wedlock, but director Wang, who also co-wrote the script with Ah Mei, rarely aims for pathos and over the top sentimentality. Instead, he focuses on the repercussions of the different social and economic policies ran in China over the course of three decades, from the dusk of Cultural Revolution and hard line communism to the boom of consumerism under the wing of state-sponsored capitalism witnessed at the turn of the millennium. The consequences are being shown from the perspective of ordinary people, using the two families as an example, focusing more on the individual than wider social level of the scope.

Ambition, guilt and shame is something Wang deals with, while the wheel of history and politics stays always in the background. That is the principal reason for the non-linear structure which makes the film hard to follow in the beginning, while it pays off in the end, with a rare example of an earnest, non-sappy happy ending in the recent film history.

The acting is masterful throughout. Both Yong Mei and Wang Jingchun were crowned for their performances at the festival’s award ceremony, rightfully so for the layered portrayals of complex characters, but the rest of the ensemble deserves a shout as well. That especially goes for the young Roy Wang who shows some real star power and the tactile Qi Xi, whose beauty is even more stunning than in her breakthrough role in Ye Lou’s “Mystery”.

Regarding the technical aspect, “So Long, My Son” is an accomplished piece of cinema with mesmerising cinematography by Kim Hyun-seok who applies just the right amount of camera movement for the film to be neither static nor hectic, while the unobtrusive music written by Dong Yingda in a pretty classical fashion. In the end, the mathematics is pretty simple: the viewers who remain patient for the first hour of the film will be rewarded in the end with a subtle and detailed piece that shows Wang Xiaoshui is close to the top of his game.

Interview with Kazuhiro Soda and Kiyoko Kashiwagi: Once you start manipulating, the film is all about ‘yourness’ 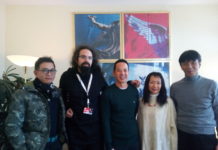 Interview with the director Ray Yeung and the actors Tai-Bo, Ben Yuen and Patra Au