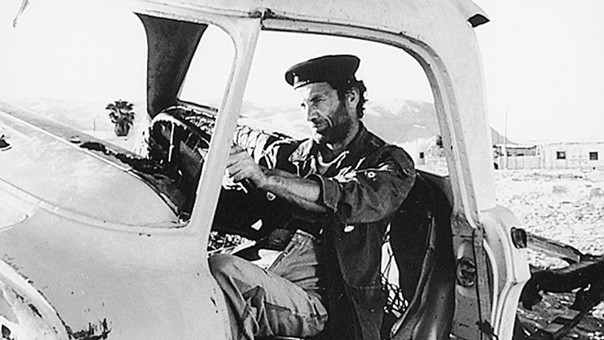 After the Madrid Peace conference in 1991, the negotiations in Oslo at 1993 and the autonomy accord in Cairo in 1994, the peace between Palestinians and Israelis looked like a possible prospect at the time. Rashid Masharawi takes a look at the way a number of different people react to the prospect of peace, inside a Palestinian refugee camp, with “Haifa”, which screened in the Un Certain Regard section at the 1996 Cannes Film Festival.

There is a saying in Greece that could be translated as “you learn the truth from the very young and from the very crazy”. The second part of the saying fits perfectly Haifa, a middle-aged man who gets his nickname from the town he loves, and roams around the refugee camp in a military outfit, spurting words that make people perceive him as the town fool, but also seem quite close to the truth. The rest of the narrative’s focus lies with Abu Said, a former police officer who still hopes that when peace comes he will be reinstated, and his family. His wife, Oum Said, believes that the family’s future lies with her elder son, who is about to be released from prison, and expected to work in order to sustain the family and give a better future to his younger brother, Siad, a young man who seems to be as pessimistic and nihilistic about the future as his parents are hopeful. Sabah, his 12-year-old sister has romantic aspirations about the future, additionally revolving around a local boy.

With the exception of the opening scene, a lengthy long shot that shows two Palestinians escaping Israeli soldiers, Rashid Masharawi avoids any kind of dramatic presentation of the situation of the time, instead using a relatively cheerful, but also intelligently ironic approach. The medium for this last element is Abu Said, who works as a cotton candy vendor but still hopes that he will be a policeman once again, with reality eventually crashing on him in the most tragic way. This tragic irony also functions on a secondary level, since the celebration for the supposed peace seems almost sarcastic when one considers what happened in the following years.

On the other hand, Haifa seems to be the medium of Masharawi’s political and social comments, with him using the character in order to present them in a cheerful but still quite impactful way. Furthermore, the character’s longing for the seaside city seems to represent the way all Palestinians felt. Mohammad Bakri is exceptional in the role of the “wise fool”, with him acting as a caricature in the most delightful way.

The three siblings represent different parts of society, with the older one being in prison for being an activist, the younger one probably walking that way also, and the girl trying to figure the role for women the future holds. The portrayal however, extends to all aspect of Palestinian society, like the women who still expect the exiled relatives to return, with a realism that touches the borders of the documentary. At the same time, the differences between the way of thinking between the previous and the young generation are quite eloquently portrayed during the end.

In these, last aspects, Masharawi benefits the most from Edwin Verstegen’s cinematography, who focuses on the realistic presentation of the setting of the refugee camp, not forgetting, though, to present sequences of haunting meaningfulness, like the one that closes the film.

“Haifa” is a great film that manages to highlight a number of sociopolitical comments through a presentation that is meaningful as much as it is entertaining.

Director of Vesoul Intl. Festival of Asian Cinemas Conferred the Order of the Rising Sun

Interview with Kim Yuri: “How do loving families fall apart?”