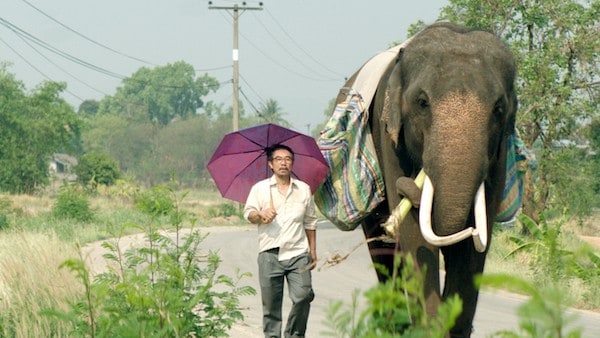 Kirsten Tan has hit it from the beginning, with her debut feature being the first Singaporean movie selected to screen at the Sundance Festival, where it won a Special Jury Prize in the World Cinema Dramatic Competition section of the 2017 edition.

Architect Thana has run into his childhood friend, an elephant called Pop Aye, just at the right moment. The world seems to be passing him by as a landmark shopping mall he designed in the 90’s is being torn down, the young people currently in charge of the company he works for seem not to value him very much and his wife, Bo, seems to be distant, and less and less understanding. Thana decides to take the elephant back to the rural village where they both grew up and into his uncle Peak’s (Narong Pongpab) care. His journey away from the city brings along a collection of unforeseen obstacles and encounters, with the police playing a key role in his trip.

Kirsten Tan directs a very beautiful movie about a man trying to figure his place in the current world and to find a sense of purpose by getting reacquainted with his past, in a road trip movie that also functions as a tour guide to the beauties of rural Bangkok. In this trip of self examination, Kirsten throws some very entertaining episodes, that include a hoodlum, two police officers, a trans man and a prostitute, the aforementioned uncle, a vibrator, some watermelons, and of course, the elephant, whose presence dominates the movie, both visually and in terms of context. Regarding the last aspect, I felt that Tan gives the role of “the elephant in the room” to the animal, with it symbolizing the fact that Thana does not want to face the truth, and subsequently reality, with the whole concept crumbling down on him during the last part of the film.

Through Thana’s story, Tan makes a number of social comments, particularly regarding the past that is left behind and the future that is arriving without any kind of regards for the former, with the concept extending to tradition and progress. The central theme of the film, though, is change and how can people embrace it, particularly after a certain age.

Tan retains a mood that lingers between the comic and the dramatic, along with some splashes of surrealism, with the two switching places in a fashion that benefits the entertainment aspect of the film the most, despite some moments that border towards the melodrama, like the “no good deed goes unpunished” sequence revolving around the hoodlum. In this tactic, Matthew James Kelly’s music plays a significant role with a number of memorable tracks, including the main theme.

Chanasun Chotrungpro’s cinematography is another of the film’s traits, with his use of color and the different but constantly impressive images in a number of different locations. Lee Chatametikool’s editing implements the “mellow” pace of the story quite nicely, while the various flashbacks are presented in easily understandable fashion.

Thaneth Warakulnukroh is the definite star of the production and he gives a magnificent performance as a man lost and frustrated, who does not know who and what to blame for his situation, and where to go after all of his life seems to be ruined. Tan demanded a lot of him, making him portray a number of different psychological and emotional statuses and him delivering in the best fashion. (And no, I will not comment on the elephant’s acting).

“Pop Aye” is a very beautiful and meaningful film, and a promising feature debut by a director who is bound to draw attention again in the future.