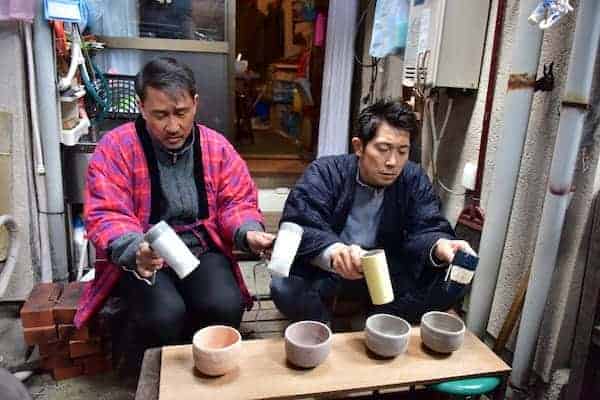 From the director and scriptwriter of “100 Yen Love”, comes a rather enjoyable comedy about the world of antiques and the shenanigans of the people involved.

Norio Koike is an antique dealer and a scammer (as almost every protagonist and definitely anyone in the antique world in the film) who operates from his van along with his daughter, Imari and has a tendency to believe his horoscope. One day, upon his visit to the house of a seemingly indifferent owner of antiques, he stumbles upon a truly rare piece, and proceeds on swindling his way into owning it for a very small sum, thinking he finally has the big chance he has been waiting for years.

Unfortunately, he soon finds out that he has been swindled himself by the owner, who turns out to be a failed potter named Sasuke Noda, who heads a “gang” of forgers operating from a small bar. As his daughter and Sasuke’s son, Seiji, come closer, Norio finds himself collaborating with the man who tricked him, in order to con distinguished appraiser Seiichiro Tanabashi and famous dealer Tadayashu Hiwatashi, both actual crooks who have cheated both our “heroes” in the past. First, however, Sasuke has to forge a perfect Rikyu tea ceremony chaki and Norio a perfect story to sell to potential buyers.

Masaharu Take directs a very entertaining “scam the scammer” movie, with the concept actually carrying to the finale of the film, in a series of comic episodes. However, the elements that make the movie stand apart from the majority of comedies is the realistic approach and the attention paid to the world of antiques and ceramics in general, with the level of historical detail and the depiction of the processes involved bordering on the documentary.

Regarding this last aspect, the film benefits the most by Hiromitsu Nishimura’s cinematography, who presents the aforementioned with artistry and accuracy, and the editing, which highlights the procedures in a way that appears as a music video, and thus, quite entertainingly. Add to that some manga-like sequences, occasionally involving chasing, and the feisty jazz score, and you have the backbone of the film.

Another point of excellence is the acting (and the casting for that matter), with Kiichi Nakai as Norio and Kuranosuke Sasaki as Sasuje highlighting both their characters and their chemistry. Feisty Aoi Morikawa as Imari and nerdy Tomoya Maeno as Seiji make for a hilarious couple, while Masaomi Kondo as the “noble villain” Seiichiro and Kogan Ashiya as the “despicable villain”, add another level of entertainment in the film.

“We Make Antiques” is a very interesting film, that manages to entertain while sharing knowledge about the world of antiques, history, and pottery with precision.