Director Huang Huang questions traditional teaching methods and the meaning of right education in his directorial debut “Wushu Orphan”. The film premiered at the 31st Tokyo International Film Festival, where Huang Huang was awarded the Spirit of Asia Award, an award that is given to a promising newcomer director whose work is a part of the Tokyo International Film Festival Asian Future section.

Sometime in the late-90s, Lu Youhong joins Zhige Wushu Academy, a remote wushu school, as a Chinese teacher. Since they are also lacking an English teacher, he is also given the job of teaching what little English he knows to the student. The school, overseen by a strict patriarchal principal, is one of the biggest martial arts institute in the country and puts its emphasis on martial arts, winning several awards. Every student here dreams of one day being the next Bruce Lee, Jackie Chan or Jet Li. Well, all except one. Zhang Cuishan is brilliant at academics, but he cannot stand martial arts and just tries to run away from the school at every given opportunity. Lu develops a soft spot for this bullied student and tries to help him in any capacity he can, while the fallacy of the ethos of the martial arts tradition starts to bear down on him and begin to wear him out.

Huang Huang’s witty satirical script is very critical of the education system and the values of such traditional schools in modern, technologically advanced times. He calls them out for putting such an emphasis on martial arts, which could be helpful in society only to a certain degree, and not on basic skills as language or mathematics. Even though this is Lu Youhong’s first job ever, and he has no formal training as a teacher, having gotten this job only because he’s the dean’s nephew, he is given the task of teaching English to the students, a language he admits he knows very little of, because the teacher quit and even mathematics, when the teacher for that quits the job as well. In fact, the only teacher who has a steady job here and is a constant presence is Coach You, the wushu teacher, who has been hired after an extensive search because of his various successes as a martial artist. Strict physical punishments are also given out, exhausting the students, even if that makes the rest of their academics suffer. There is also a critique of the parents who force such harsh, traditional standards on their children while themselves move to big cities to live and earn.

The film is also filled with lots of interesting, whimsical characters, each with their own unique traits. Apart from Lu Youhong, played by Noah Jin with a unique wide-eyed charm, Jiang Qin, the principal’s limp son, who loves to chew gum and smoke at the same time, is arguably the most interesting. He is about the same age as Lu, but hangs around the school, having fallen out of favour with his father, who loves his falcon more than his son, because of the injury that ruled him out of martial arts for life. Portrayed by Yes Shi, he is the film’s most interesting character. The principal, who watches over the school from the rooftop with his falcon, Coach You who never removes his sunglasses, Dean Lu, who likes to throw random poetic verses at Lu Youhong for him to guess where they’re from and even An Lan, the beautiful female doctor in the school who is the object of Lu’s affection are all interesting characters that are developed well and played well by each actor. There is also a  separate, simultaneous story of an old wushu master who goes around the country challenging other wushu masters which seems confusing to begin with, but reaches a successful conclusion.

At almost 120 minutes, the film does tend to feel just slightly long, but doesn’t overstay its welcome too much. Director of Photography Liu Yong gives a pleasing rustic look to the countryside locales and to the sprawling complex of the wushu academy. The synchronised martial arts training of the students in particular is beautiful to watch. Although used frugally, Feng Jin’s music is very appealing, with a mix of electronic sounds and pop songs that play over the radio Lu loves to listen to so much.

Though the film has a strong message it wants to get across, it manages to do so without feeling heavy-handed about it and in an entertaining manner. Featuring endearing actors with endearing performances and some genuine moments of humor, “Wushu Orphan” is a strong debut from fresh talent Huang Huang who fully deserves the Spirit of Asia Award, chosen for being expected “to be internationally active beyond cultural borders”. 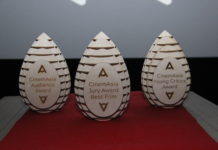