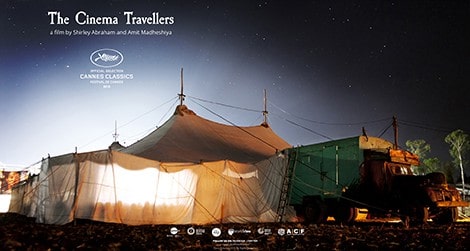 India is a land of many religions. One of them is cinema. Popularity is too tame a word to describe the hold movies have over the Indian psyche. Movies form an outlet for many and for the greater part of the twentieth century, one of its few forms of entertainment. Around the 1940s, groups of travelling cinema came into being, travelling to various villages showing movies. These visits were done during religious festivals or fairs. This is still going on today in the state of Maharashtra. The documentary film, “The Cinema Travellers”, released in 2016, and directed by Shirley Abraham and Amit Madhesiya, captures this event in a poignant and unforgettable way.

The documentary focuses on the lives of three people who are connected to touring cinemas. Two of them run their own touring talkies and a third is an engineer who fixes these projectors. It opens with the running of a projector and the touring company setting up their tents and such, for the night show. The show is held inside a large tent and the projector is inside a truck. The audience sits on the ground. After a delay which angers some of the audience, the movie starts and the audience watches it mesmerized. The portrait shots of the audience as they watch the movie capture this feeling brilliantly. These shots are used again in the end.

The touring talkie owners are struggling, due to falling attendance and one of them is reduced to showing semi pornographic movies during the late-night show to boost sales. The spotlight on the engineer offers a different perspective. He talks about the time there used to be long lines in front of his shop by people looking to get their projectors repaired. He offers an interesting perspective about machines, saying that if humans did not understand each other, they would not be able to build machines. He talks about the process of creativity. In the end, the owners are forced to adapt and they end up buying digital projectors and laptops to show their movies.

There are multiple points which ought to be highlighted about this documentary. First and foremost, it is the opening scene. The bright light caused by the wire burning, and then the glow lessening to reveal the projector running is brilliant. It hooks the audience in, instantly. By keeping the focus on three people, two of them touring talkies owners, the directors intend to offer different perspectives on the same situation. Mohammed, the owner of Sumadh Touring Talkies is young and has started from the bottom and is always trying to come up with innovative ways to boost sales. Whether it be the showing of a semi pornographic movie to boost sales or buying a digital system to get better image quality. Bapu, the owner of Akshay Touring Talkies does not want to give up his business. He is not earning much for it and reveals that it is much more than money for him. Though it may seem that the tide of technology will eventually sweep away their business, they still hold on, trying to survive.

The engineer, Prakash, offers a philosophical flavour to the whole documentary. His views on how machines work, on creativity and imagination, offer food for thought. It makes the audience question what they are doing with their lives. Here is this man of little means, thinking up different kinds of machines which will be his legacy. It is a beautiful reminder that engineering prowess and creativity does not only exist in multi-million dollar labs, but also in the back alleys of forgotten towns and villages.

This documentary is a visual treat. India is a cacophony of colours and to show this without it becoming overwhelming is a challenge. The directors pulled this off brilliantly. Two scenes stand out as a showcase of how much effort has been put in to making this documentary. The first is the scene of the tent with a movie playing inside it and star studded night sky in the background. There is even a shot of a shooting star. The second scene is the one of the fair, which possibly indicates a Holi like festival with yellow powder being thrown everywhere. Whether indented or not, the documentary also captures life in rural India.

The use of sound is again excellent. One scene that highlights this is when Prakash brings out his musical instrument which he has not played in a while. He plays a few notes on it. In any other scenario, it might not look remarkable but under the setting of the tiny shop and the old engineer reminiscing, it adds a melancholic mood. It is hard to forget the announcers calling out chala, chala chala!

Progress is not always kind to everyone. Sometimes, some people lose out and touring talkies maybe gone in a few years. It is an echo of the initial days of India’s love story with cinema. Capturing this before it is completely gone is important and “The Cinema Travellers” has done it well. Take a bow!