“Salaam Bombay”  hit the large screen when Indian cinema was grinding out the trend-clung commercially ambitious pictures in abundance, which had put the chances of intellectually decorated cinemas in a big daze. However, despite this un-blissful confusion (for the producers ) the film clicked well with the audience upon release and, almost immediately, became darling to the community who articulate their impressions about films professionally. Privileges it clawed its way to, kept growing in numbers with many prestigious accolades and intangible honors, it received the award of the National Film Award for Best Feature Film in Hindi, at Cannes it was honored with the Golden Camera and Audience award and very remarkably it glints from the 1000 films put together by the New York Times, a list about opulent visual creations. 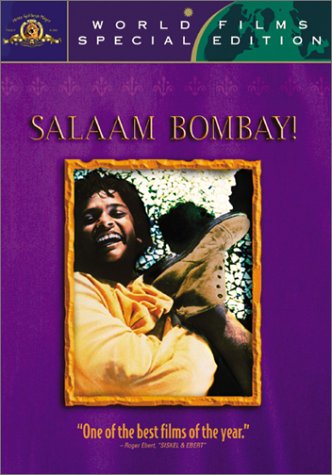 It is an aesthetic narrative about life in and around the slums of Bombay (now Mumbai), grotty unheard tales of poverty and how these lives have more novelty than the lethargic breathing of dullness, the amity with absence of diversity and the uncertainty of life. A juvenile named Krishna is stranded by poverty ridden rage for his closest ones, and moves to Bombay, where he starts his life from scratch. Shortly after his arrival, meets and befriends Chillum, a grown up man who ushers him to smile through his own blithe life and whimsical nature of happiness. In this odyssey, a brothel is revisited, from time to time, for professional purpose and romantic urge. In there, he meets a newly brought girl dubbed as Sola Saal (Sweet Sixteen) whom he moons over, Rekha, a prostitute who lives with her daughter named Manju, with the latter holding a slight obsessive affection for Krishna. Baba, the alpha male in the movie is hideous and arguably a nihilistic personification of the city’s bourgeois-face.

In many publications, the story of how Mira Nair (director) spent her time to understand the nature and emotions of the slum-poverty surfaced and showed the extent of honesty and hard-work she was ready to put into this film. The actor who plays the role of Krishna and many of his friends, who play characters in the film, were picked from below – the – poverty- line life of Mumbai’s slum area. The success of this process becomes evident on the screen, as the audience witnesses the effortless blending of the characters with the direction of Mira Nair. Her style of direction and dogma rejected artificially made sets, so the actors reveal their reactions to their life when they are ready, in a tactic that brings the audience to the core of the class where every penny counts. This is neither a fast film nor it tests audience’s patience, rather it allows them much time to connect with every detail and to be moved.

This film is awash with actors and has no ‘star’. This wisdom in understanding a film’s organic progress broadens the horizon of its beauty and made the wall between reality and fiction hardly visible. Krishna though, is in the centre of the attention, although every major character is able to intrigue audience and invite them to explore their depth, due to the strength of each actor’s performance and thoughtful sketching.

Cinematographic prowess and, sometimes cunning tranquil use of light and shades set the bar higher for Indian Cinema. Sandy Sissel’s cinematography highlights most of his knowledge about palette, colors and how they can draw feelings from the audience, making it a feast for the eyes. The orange-ish light on the background of a dark black night or the part where the premises appear surreal through the day’s gloomy rain is immersive. The script gets the audience glued to their sits as it keeps them intrigued about what happens to Krishna at the end, and the background score is somewhat successful in accentuating the notes, although not engaging in terms of listening pleasure.